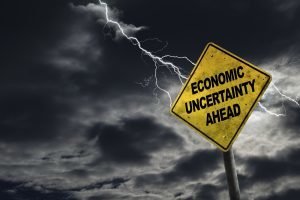 After 10 years of a sustained recovery from the Great Recession of 2008-2009, there are economic warning signs that a slowdown is on the horizon. These storm clouds could bring challenges for Maryland’s economy and create headaches for the State’s budget planners. Some recent developments of note:

All, however, is not doom and gloom. Maryland’s budget leaders have been briefed about economic slowdowns and understand that it is imperative that the State be on a solid fiscal footing. As an example, Governor Larry Hogan’s Fiscal Year 2020 budget proposes a significant increase to the State Reserve Fund, better known as the Rainy Day Fund, to $1.3 billion. This is an important acknowledgement that a probable economic downturn requires responsible budgeting. Whether a growing Rainy Day Fund and a firm understanding of economic storm clouds on the horizon is enough has yet to be determined. There are simply too many factors and unexpected events (such as a prolonged government shutdown affecting 800,000 federal employees) that make predictions difficult. That is why it is so important that policymakers see the big picture and alter their approach accordingly.