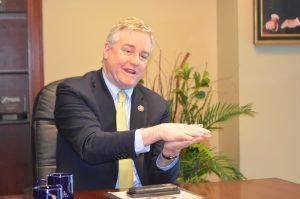 The GBC agrees with this very important priority and in 2017 created the Coalition for a Second Chance, a group of experts from the public and private sectors charged with examining barriers to employment for those returning to society from a period of incarceration, as well as other policy issues tied to reentry for these individuals. The Coalition for a Second Chance produced the report “Opening Doors to a Second Chance: Removing barriers and cultivating job opportunities for returning citizens and job seekers with a criminal background.” Congressman Trone also shared a report produced by the Trone Private Sector and Education Advisory Council for the American Civil Liberties Union, entitled “Back to Business: How Hiring Formerly Incarcerated Job Seekers Benefits Your Company.”

It is easy to forget during a busy 90-day session of the Maryland General Assembly that partnering with members of the Maryland Congressional Delegation is also important for taking positive steps to address the most important policy issues facing the Greater Baltimore region and the State of Maryland.