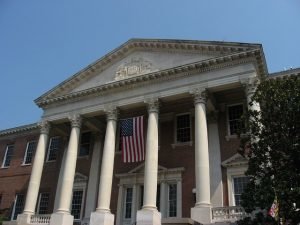 This commentary was published in The Daily Record on February 28, 2020.

In recent days, the debate in Annapolis over legislative proposals to address public safety concerns has become personal and emotional between Governor
Larry Hogan and legislative leaders.

There are multiple bills pending in the House of Delegates and Senate of Maryland to enhance public safety initiatives throughout the State of Maryland – although most of the concern is focused on Baltimore City. The approaches differ with the Governor calling for more mandatory minimum sentences for repeat violent offenders, increased judicial transparency, and victim restitution. Meanwhile, the legislature’s focus is on increased penalties for the failure to report lost or stolen guns, penalties for possession of stolen guns, creation of a statewide law enforcement coordinating council, and a comprehensive statewide study/audit of all gun crimes. Both the Governor and legislative leaders support strengthening laws on witness intimidation.

What combination of these ideas will prevail is difficult to predict at this stage of the legislative session, but, without question, public safety-focused
legislation will be enacted this year.

Data surrounding the victims and suspects of homicides that occurred in Baltimore City in 2019 provides insight into clear deficiencies within the
criminal justice system that must be addressed.

But, perhaps, the most shocking statistics pertaining to the victims of homicide were that they had an average of:

An analysis of the data surrounding the suspects involved in the homicides is equally troubling.

The homicide suspects had an average of 8.2 arrests and 26.7% were under the supervision of Parole and Probation at the time of their arrest.

This high-level analysis, when considered in relation to the public safety legislation pending in the General Assembly, points to the need for certain
reforms outlined below:

Arguments can be advanced by all sides suggesting that they have the solution to our public safety challenges. I suggest there is no universal answer or magic elixir that will guarantee an immediate turnaround, but that we should use evidence to make informed policy decisions. It is time to move past the rhetoric and advance proposals that address the structural deficiencies exposed by the raw data surrounding Baltimore City’s 2019 record homicide numbers.