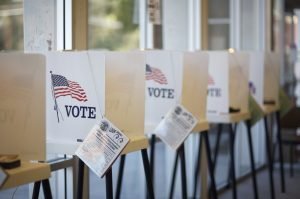 Maryland voters went to the polls on Tuesday, November 6 to cast their ballots in the 2018 General Election for races including Governor, Comptroller, Attorney General and all 188 seats of the Maryland General Assembly. In the statewide races, all three incumbents, Governor Larry Hogan (R), Attorney General Brian Frosh (D) and Comptroller Peter Franchot (D), prevailed by wide margins for new four-year terms. In the Maryland General Assembly significant turnover occurred. In the Senate of Maryland, there will be 17 new Senators and many new faces in leadership positions. Senator Thomas V. Mike Miller (D) returns and will likely continue his role as President of the Senate. His leadership team will consist of three new committee chairs and four new vicechairs, leaving only Judicial Proceedings Committee Chair Robert Zirkin (D) in the same leadership post. The Senate had a turnover rate of 36 percent, which easily eclipses the 21 percent turnover in each of the previous two elections. The new partisan split in 2019 will be 32 Democrats and 15 Republicans, a one seat gain for the GOP. The large Democratic majority is key for filibuster and veto decisions.

In the House of Delegates, the turnover was smaller than the Senate, but still significant. In 2019, there will be 42 new faces in the House, a turnover of 30 percent. This compares to a larger 37 percent turnover rate in the previous election and 21 percent following the 2010 election. Delegate Michael Busch (D) is expected to return as Speaker of the House. The Democrats expanded their majority with a gain of seven seats, creating a split of 98 Democrats and 43 Republicans. The 98 Democrats far exceed the 85 needed to override a Governor’s veto of legislation.