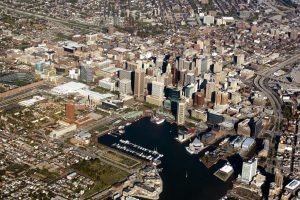 Editor’s note: The following commentary appeared on thedailyrecord.com on May 18, 2018.

Construction cranes are prevalent throughout the Baltimore region these days — from downtown Baltimore to Towson, Columbia and beyond — and to many they are the most visible sign of changes afoot in Baltimore City and the surrounding counties.

But the recently released 2018 Greater Baltimore State of the Region Report makes clear that other changes have occurred during the 20-year period studied. These changes, although not as starkly visible as construction cranes, are significant nonetheless.

Some of the findings worth noting in the 52-page report are as follows:

Of these evolutions during the past 20 years, the regional gains in the college-educated populace and the transition to a knowledge-based economy are particularly welcome and put wind in the region’s sails.

These findings highlight that the Baltimore metro region is well positioned for the highly competitive global digital economy that is changing the economies of virtually every city in the U.S., if not the world.

Underscoring this conclusion, a recent Brookings Institution study that looked at 70 U.S. cities with post-war industrial economies – referred to as “older industrial cities” — found that Baltimore is a strong performer in the economic transition being led by the digital revolution.

Only 16 of the 70 cities studied made the strong category in Brookings’ “Renewing America’s Economic Promise Through Older Industrial Cities” study.

Great core assets, such as major academic research centers like Johns Hopkins University and the University of Maryland, Baltimore and defense institutions like Fort Meade and Aberdeen Proving Ground, are among the bedrocks that have helped in the amazing transformation of the regional economy. Today they are serving to further strengthen and position the region for the knowledge-based economy.

Meanwhile new jobs, such as those in cybersecurity and medicine, have replaced jobs lost in the economic shift from old to new and are proving to be of high value to employers and thus commanding higher wages. This trend is likely responsible for the increases in median household and per capita incomes.

Despite these optimistic statistics, a significant increase in the cost of living makes it more difficult for those on the lower end of the income spectrum to save for retirement, education and other advancement opportunities.

The State of the Region Report contains indices that pinpoint areas of concern when contrasted to the initial regional report of 1998. For example, the region has experienced declining home ownership, higher work commute times, and has consistently ranked poorly in the level of violent crime.

The key for private-sector leaders, elected officials and others is twofold. First, it is vital that the region takes advantage of and leverages its gains in educational attainment and personal wealth and its economic transformation. This will allow the region to grow and compete aggressively in the global economy. Second, not all of our region’s citizens have benefited from the economic prosperity. Strong efforts must be taken to ensure that all citizens of the Greater Baltimore region are positioned, through education or workforce training, to fully participate in the new economy that has taken hold and bodes so well for the region.

By expanding opportunity for all, our region will grow stronger and become a more powerful economic engine for Maryland.