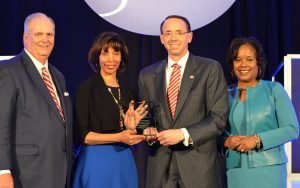 Editor’s note: The following commentary appeared on thedailyrecord.com on May 18, 2017.

If you were not familiar with who Rod J. Rosenstein was a few weeks ago, chances are you certainly are now.

He is, of course, the deputy attorney general for the U.S. Department of Justice who on Wednesday shook up Capitol Hill and the White House by naming former FBI Director Robert Mueller III as a special prosecutor to investigate possible Russian interference in the 2016 presidential election.

Rosenstein was confirmed with little debate by the Senate just three weeks ago but soon landed in the middle of the vortex triggered by President Donald Trump’s surprise firing of FBI Director James Comey on May 9. Initially, until later refuted by President Trump, his memorandum to Attorney General Jeffrey Sessions about Comey’s conduct during the 2016 presidential election was cited by White House media as the reason for the firing.

Talk about having to walk on hot coals in your first weeks in a new job. Rosenstein, who served laudably as U.S Attorney for the District of Maryland for 12 years before his recent appointment, has navigated the burning coals with grace under fire.

That really shouldn’t be all that surprising to anyone who is familiar with the remarkable transit of his impeccable career and his friendly, steady, self-assured demeanor.

That demeanor was on full display when Rosenstein took the stage to accept the Howard “Pete” Rawlings Courage in Public Service Award during the Greater Baltimore Committee’s Annual Meeting on May 15.

The GBC had selected Rosenstein for the award before he was nominated for the position he holds now to recognize and honor him for his tenure and exemplary record as U.S. Attorney for the District of Maryland. To ensure the event did not turn into another media spectacle, the GBC did not heavily promote the fact that Rosenstein would be attending to receive the award.

And so the announcement of his name Monday evening caught the crowd of 1,000 mostly by surprise. The room rustled with a quiet buzz as he took to the podium.

He opened by noting that after the Comey dismissal erupted into a firestorm, a friend urged him to get out of Washington. This, he said, reminded him of a quote by Thomas Paine: “The summer soldier and the sunshine patriot will, in this crisis, shrink from the service of their country.”

And so, Rosenstein told the crowd, he responded to his friend: “There is no place I would rather be.”

What he was saying in so many words was, yes, he’d been tossed into the maelstrom – flak coming from all sides. But he wasn’t going to retreat.

He had been thrust into the national spotlight with biting questions about his role and motives – an uncommon turn of events for this highly-regarded career public servant.  So, it’s doubtful anyone would blame him if he decided not to show up to receive the GBC award. But he did.

When he was ushered into the ballroom Monday, Rosenstein beamed. He shook hands with familiar faces. He wanted to mingle with old friends and enjoy the evening.

But, as it turned out, he not only accepted an award but he left that evening’s meeting imparting important fundamental lessons that are all too often overlooked – lessons that he has learned and guided him in more than 25 years of public service.

In its entirety, his speech is a declaration about courage in public service – which he displayed on Wednesday when he appointed Mueller.

Consider just some of what Rosenstein had to say Monday:

“Some say Rod Rosenstein’s job is one of the most precarious positions in public service,” he noted, citing a news article. “That was written in 2007. I was U.S. Attorney for Maryland at the time, and some things do not change. I’m the 37th deputy attorney general of the United States. The position has existed for 67 years. You do the math.”

Let’s continue with Rosenstein in his own words:

“What is courage in government? It certainly includes standing on principle. Ignoring the tyranny of the news cycle. Resisting the urge to spin and remain focused on the things that matter. Daily newspapers and the endless talk shows are not the verdict of history.”

And, then to put an exclamation point on things, he also said this:

“Many people have offered over the past few days unsolicited advice about what I should do to promote my personal reputation. But I took an oath to preserve, protect and defend the Constitution of the United States. There is nothing in that oath about my reputation. And so if you ask me what one of the main problems with Washington, D.C., is today, it’s that so many people are busy running around trying to protect their reputation, rather than protecting the republic – which is what they are supposed to be doing.”

And so there you had it. This was a man with a backbone and a moral compass who had found himself at a time and place with both in short supply.

He’d come Monday to accept the GBC award, but also to say that it’s time to take a step back from the charged, self-absorbed political atmosphere and see courage in public service for what the Founding Father’s intended. That is, setting aside your own political uncertainty and staying focused on getting the job done, not on getting the headlines. But above all, it is about allegiance to the Constitution and the Republic — not to reputation or personal gain.

It is an important message for all of us – elected and non-elected – to follow as a guide. Let’s hope the message resonates far and wide.

You can watch Rosenstein’s speech here.