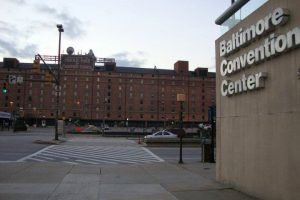 Built in 1979, the facility was last expanded in 1997. Since that time, competing peer cities, such as Washington, D.C., Philadelphia and Nashville have invested in new or expanded facilities that have modernized amenities and can accommodate larger groups.

The emergence of new and larger convention venues and the growth of meeting attendance has resulted in some lost business for the Baltimore Convention Center. For example, Natural Products Expo East, one of the largest events held in Baltimore, is relocating to Philadelphia in 2020 because the venue cannot accommodate the event’s growth. Otakon, an Asian pop culture event that drew 30,000 visitors to the city each year for 18 years, has departed Baltimore for the same reason.

Visit Baltimore, the city’s tourism arm, cites the venue’s size as the main reason the city loses business to competitors.

Fortunately, a window of opportunity has opened to address the issue by expanding and modernizing the Convention Center so it has the space and features to attract major events and compete with peer cities.

Legislation was passed in the 2019 Maryland General Assembly session that authorized planning and design for an expanded Baltimore Convention Center, with the state and city sharing the costs. The design process would define the architectural and engineering elements, construction timelines and other details to enlarge the venue’s footprint by 500,000 square feet to 1.7 million square feet. Exhibit space would grow by one-third to 400,000 square feet. A new 500-room hotel also would be built on the site of the existing Sheraton Inner Harbor Hotel.

The cost of the planning and design exercise would be overseen by the Maryland Stadium Authority. The state would pay two-thirds of the costs of the report, while the city would pay one-third.

Despite increased competition the Baltimore Convention Center remains vital to the region’s economy. Tourism and visitor traffic – strongly tied to the facility – support an estimated 86,000 jobs, $10.3 billion in overall sales, and state and city tax revenues of $417 million and $299 million respectively, according to Visit Baltimore’s 2018-2019 Annual Report and Business Plan. The report also estimated that events coming to the city between 2017 and 2030 would result in $260 million of economic impact.

Expanding and modernizing the venue would both protect this projected economic impact and provide for even greater opportunities for event growth.

To remain competitive in the convention tourism business and to enjoy the economic vitality it brings to the state and city commitments must be made  to make investments that keep facilities top of mind to event planners and conference/convention organizers. Failure to do so limits the city’s potential as a top tier meeting destination location. Expansion of the convention center would address the competitive edge issue.

For years, the Greater Baltimore Committee (GBC) has solidly supported an expansion of the convention center as a smart investment for the city and state based on projected yields in economic benefit.

A business case analysis conducted by the GBC in 2011 noted that “…Conferences and conventions…help lure in visitors to spend money on local hospitality, food, and retail shopping outlets. The ability for Baltimore to sign a national conference can mean millions of dollars dropped into the local economy within just a few days.”

Now is the time for city leaders to support and embrace the goal of an expanded Baltimore Convention Center. The city can’t afford to lose ground in one of its economic engines that produces a significant financial return and provides employment for thousands of city residents. This is an opportunity that can’t be missed.

Read more at The Daily Record.