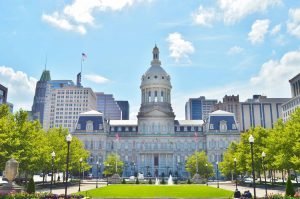 While COVID-19 dominates the attention of many these days, there is a pivotal and transformative primary election coming up in Baltimore City on June 2.

Seats up for election include those for mayor, city council president, comptroller and city council.

Those elected on June 2 will go on to have a significant role in Baltimore’s future and its ability to successfully address a number of complex issues.

Due to COVID-19 restrictions in place, candidates have had to sideline traditional campaign tactics in favor of virtual tactics. Facing these new election dynamics, Baltimore voters must take it upon themselves to get informed about the candidates’ backgrounds and positions on major issues.

Elections matter. They have consequences. Elections are not a spectator sport.

With this in mind, the Greater Baltimore Committee launched a public service campaign in April called “In Their Words…” This educational election series, based on responses to questionnaires the GBC sent to candidates, aims to help inform voters about those running for Mayor and City Council President.

The GBC does not endorse or finance candidates, but it does believe that it has a role to play to ensure voters are informed and engage in the election.

Improving public safety in Baltimore is one of the hot-button issues in the election as Baltimore continues to see high rates of shootings and homicides.

In the GBC questionnaire, mayoral candidates were asked:

“What are three actions that you would take in your first year to improve public safety?”

A sampling of the responses to this question by the leading candidates for Mayor offers one an example of the diversity of thinking and opinion between the candidates.

Former Mayor Sheila Dixon: “I believe that to address public safety in our communities, it requires a holistic approach. First, we must go after the most violent offenders.” To do this she would establish an “analysis and apprehension program in the homicide unit that will be responsible for supporting investigators…”

Second, she would “reinstitute the Criminal Coordinating Council” that was active in her previous administration as mayor. A third action would be “to work to implement stronger policing practice within our neighborhoods.”

Mary Miller: Miller said her first action would be to “give the police commissioner the support and resources he needs to put proven crime reduction strategies in place. This will involve getting every relevant party to the table to agree on the plan and support it.”

Second, Miller would set a timetable for meeting Department of Justice (DOJ) Consent Decree requirements to restore “trust in community and police relations, sooner rather than later…” Third, Miller said, she would “modernize our data technology and analytical tools to support evidence-based policing.”

Council President Brandon Scott: Scott said he would implement a “group violence reduction” strategy. Improving public safety, he said, “…must begin with addressing the record levels of gun violence in our communities.”

A second action would be to get illegal guns and ammunition off the streets “through enforcement and prosecution.” Third, Scott said, he would “Implement a comprehensive, holistic public safety vision” for Baltimore.

T.J. Smith: Smith said he would focus on “violent offenders and repeat offenders.” He would “advocate for tougher penalties for those who illegally possess handguns.” Smith also said he would work with the Governor to reconvene the Criminal Justice Coordinating Committee to examine and recommend “high-level strategies” to “analyze, prevent and respond to crime.”

Smith said he would also form “focused development teams,” made up of city agencies and the Baltimore Police to counsel and monitor “at risk individuals” and to protect victims and witnesses and rebuild community trust in police.

Thiru Vignarajah: He said he would focus on implementing a “comprehensive crime plan.” First, he said, he would “expand Baltimore’s camera network by using aerial surveillance to aid with violent crime investigations.” Second, he would have police launch “12 simultaneous wiretap investigations targeting gangs and drug organizations…”

Third, Vignarajah said, he would seek to bring additional resources to the crime fight, such as seeking federal prosecutions for carjacking, commercial robbery and firearms violations.

He also said that under the DOJ consent decree the city should focus on recruitment and retention for Baltimore police.

As this sampling of the responses on crime and public safety highlights, there is much for voters to consider as June 2 nears. Voters can’t sit idly by in this election. They need to get informed and vote. There’s too much riding on Baltimore’s future not to get involved.

See the GBC’s “In Their Words…” series here.

Donald C. Fry is president and CEO of the Greater Baltimore Committee. He is a frequent contributor to The Daily Record.

Read more in The Daily Record.