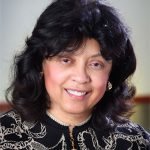 Dr. McCurdy hasn’t announced specific changes or plans for BCCC, which has a student body of approximately 14,000. She says this summer has been focused on creating a strategic plan for the infrastructure and operations of the community college.

In a recent conversation with Greater Baltimore Committee about an upcoming Sept. 27 Newsmaker Breakfast in which she will be the featured speaker, Dr. McCurdy said, “The College is in the heart of the city, and it is the heart of this city. And, it needs to rise to that strength.”

“BCCC has all the right stuff, but we need to reposition many of those things so we can realize our full potential.”