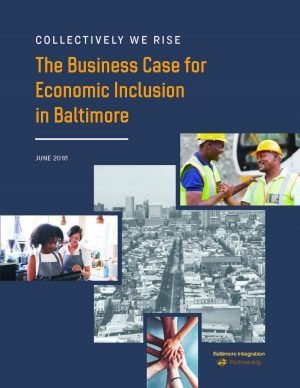 A key to improving the public perception and financial health of Baltimore is embracing a concept known as economic inclusion, according to a recent report from the Baltimore Integration Partnership.

Economic inclusion involves employers, community associations, major institutions and civic leaders collaborating to remove obstacles that have historically prevented economic advancement for disenfranchised communities, such as those returning from a period of incarceration and minorities, says the report.

An aggressive plan for economic inclusion would benefit the city and region by narrowing the disparity that exists between its most affluent and its most economically depressed areas. Achieving this goal requires specific attention to educational and employment opportunities, as well as ensuring that infrastructural improvements are made to connect individuals with these opportunities, notes the report, The Business Case for Economic Inclusion in Baltimore.

As the report says, achieving large-scale economic inclusion will require firm commitments and strong partnerships from stakeholders throughout the region – and these discussions must include initiatives that will benefit returning citizens.

The findings of the Baltimore Integration Partnership’s report complement the priorities of the Coalition for a Second Chance, a project being led by the Greater Baltimore Committee that is working to inform and educate employers on the benefits of hiring those returning to society from incarceration, sometimes referred to as returning citizens. As explained in the GBC’s Quick Guide to Hiring Returning Citizens, employment can prevent individuals who were previously incarcerated from engaging again in criminal activity. Employing returning citizens makes their reentry into society easier, which in turn relieves pressure and financial strain on the criminal justice system. Moreover, some employers find returning citizens to be particularly motivated to prove themselves as productive and loyal workers.