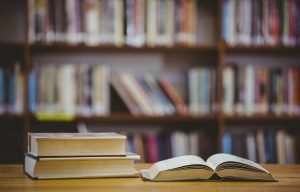 Editor’s note: The following article appeared on bizjournals.com on February 6, 2019.

Scaffolding around the Enoch Pratt Central Library came down in January, a sign that the $115 million renovation of the building is nearly complete.

Meghan McCorkell, director of marketing and communications, said the library may hold an official reopening of the Mount Vernon main library in September. Work began on the 86-year-old library nearly three years ago.

The library will close from March 1 to March 10 while construction crews move out of the first floor where they have been working. During that time, collections, furniture and other items currently residing in other parts of the building will also be moved back to the first floor.

McCorkell said she’s looking forward to the grand opening and welcoming back regular library-goers. While the building has remained open throughout the renovation, she said the library system encouraged members to visit other neighborhood branches. Scaffolding around the building has also decreased foot traffic.

Work will continue on the branch up until its opening, which McCorkell said will be a large public event and ribbon cutting. A tentative grand opening date is set for Sept. 14.

She described working plans for an “open house block party,” and said the library system is in talks with the city to close down the streets nearby for the event. The library will invite authors, performers and more to what will be a “celebration for the whole city.”

On opening day, McCorkell said you’ll find her in the library’s central hall, watching the faces of people as they enter the room and see the renovated ceiling for the first time. Conservators were able to restore original painting and molding on the ceilings of many rooms in the building, including the central hall.

“The people walking in will be knocking into things because they will be looking up at the ceiling,” McCorkell joked.

Among the changes and additions made to the library are a new children’s department, a teen center, more public computers, new workspaces and classrooms, an audio and video recording studio, a maker space and much more. Including of course, the legendary 450-gallon interior fish pond, which will be brought back to the children’s department along with a glass mosaic by local nonprofit Art with A Heart.

Many of the new private and collaborative workspaces, as well as a new job and career center, are glass partitioned rooms of various sizes. McCorkell said she imagines people using them for anything from holding a computer class, to Skype interviews with potential employers. The spaces will also be flexible enough to adapt to new technology 10 to 15 years down the line, she said.

Over the summer, the library will install new technology and refresh spaces that were used for other purposes during the renovation.

McCorkell said the number of public computers at the branch will nearly triple.

“For all of us in the building, we have little pieces of progress,” she said. “But it adds up to so much and I think people are really going to be breathless when they are able to see the transformation of bringing the building back to what it looked like in the 1930s when it opened.”