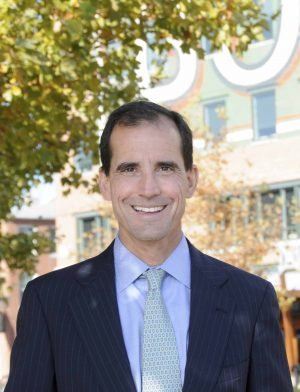 Join the Greater Baltimore Committee for a conversation with Michael Hankin, President & CEO of Brown Advisory, about building a firm guided by purpose.

Hear from Hankin about how this focus has led the firm to understanding its higher purpose: to make the future better for the firm’s clients, colleagues and the communities in which they live and work.

Hankin will share his thoughts about how a purpose-driven organization can inspire colleagues to find greater meaning in their work, deliver more impactful results for clients and empower connections across our collective communities.

Check out Michael Hankin’s TedX Talk from January 2018 here for more on the topic.

Hankin is a Partner of Brown Advisory Incorporated, an independent investment firm, where he serves as President and CEO. The firm was founded in 1993 as part of Alex. Brown & Sons. Hankin has led the firm since 1998 when it became independent and largely colleague-owned. Today, Brown Advisory has offices in Austin, Baltimore, Washington, D.C., Boston, New York, Wilmington, Del., Chapel Hill, N.C., Virginia, Singapore and London, and has clients in every state and 36 other countries. Prior to joining Brown Advisory, Hankin worked extensively with clients as a tax and business law partner with Piper & Marbury.

Hankin serves in leadership roles for nonprofit organizations with a particular focus on the environment and land conservation, education and health care. As Chairman of the Baltimore Healthy Harbor Project and Executive Committee Member of the Baltimore Waterfront Partnership and Management Authority, the public/private business tax district that is responsible for the landscaping, clean-up and safety of Baltimore’s waterfront, he has challenged the City to achieve a goal of making Baltimore’s Inner Harbor swimmable and fishable by 2020. He is also a Trustee of Johns Hopkins University, Trustee and Vice-Chairman of Johns Hopkins Medicine and Chairman of the Board of Managers of the Applied Physics Lab. He also serves as President of Land Preservation Trust, is a Trustee of the Center for Large Landscape Conservation as well as a Director for the National Steeplechase Association and Associated Black Charities. Hankin also serves on the Board of Directors of Stanley Black & Decker, Inc., as well as on the Boards of Directors of three private companies, Tate Engineering Systems, Inc., The Wills Group, Inc., and 1251 Capital Group, Inc.