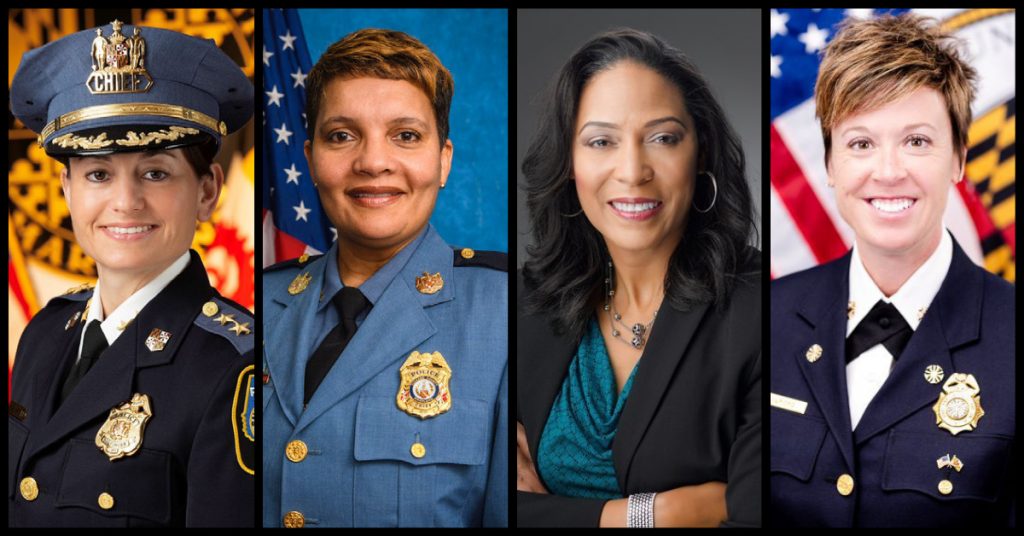 Join the Greater Baltimore Committee as we celebrate Women’s History Month and the achievements of Maryland women in public service who have shattered the glass ceiling.

Melissa R. Hyatt was sworn in as Baltimore County’s 14th Police Chief on June 17, 2019, bringing with her more than 20 years of law enforcement experience with the Baltimore Police Department. While at the Baltimore Police Department, her assignments included Chief of Staff to the Police Commissioner, Chief of Patrol and Chief of the Special Operations Division. In 2018, she retired at the rank of Colonel to accept a position of Vice President for Security for Johns Hopkins University and Johns Hopkins Medicine.

Hyatt holds a Master of Management Degree from Johns Hopkins University and a Bachelor of Science Degree in Criminal Justice from the University of Delaware. She is a graduate of the 250th session of the FBI National Academy, the Naval Postgraduate School’s Center for Homeland Defense and Security’s Executive Leaders Program, and the Major Cities Chiefs Police Executive Leadership Institute (PELI).

Chief Hyatt currently serves as the 1st Vice President for the Maryland Chiefs of Police Association. She is an enthusiastic supporter of Special Olympics and youth programs throughout the region.

Lisa D. Myers is a 29-year veteran of the Howard County Police Department (HCPD). She was appointed Chief in February 2019, one year after her retirement from the agency as a Captain. At that time, she was the commander of the Human Resources Bureau, overseeing Employment Services and the Education and Training Division.

Chief Myers began her career with HCPD in 1990 as a civilian crime lab technician. She entered the police academy in 1994 and worked in various components of the police department, including as the Chief of Staff, Patrol Division Watch Commander, supervisor of Youth Services, Public Information Officer and Community Officer

Chief Myers holds a bachelor’s degree in criminal justice from Coppin State University and is a member of Leadership Howard County, a premier program for business leaders.

Since her appointment, Chief Myers has launched a one-year field test to use drones in police operations; a realignment of patrol beats to improve response times and create a more equitable workload for officers; a reorganization of the police department’s structure to increase the efficiency of operations; and a partnership with local non-profit Fidos For Freedom to bring comfort dogs to the 911 dispatch center.

As the founder and Chief Executive Officer of Kaleidoscope Affect, LLC, Dr. Singh provides leadership and management consulting as well as strategic advisory services for a variety of public and private sector clients.

Previously, Dr. Singh was the Interim Executive Director and CEO of TEDCO. Prior to that, she served as a Major General in the Maryland National Guard, dedicating more than 38 years of service. As the Adjutant General and a Cabinet Secretary she was responsible for the Maryland Military Department.

Dr. Singh retired from Accenture in 2016. She was a Managing Director in the Health and Public Service North America Operating Unit where she served for 21 years. Dr. Singh serves on the Board of Directors of Howard Bancorp, Easterseals DC MD VA, and Headstrong, on the advisory board of Vital Guidance and Cybersecurity Forum Initiative as well as numerous other committees.

Dr. Singh holds a bachelor’s degree in business, a Master of Business Administration, a Master of Strategic Studies and a PhD in Industrial and Organizational Psychology. She is the author of “Moments of Choice: My Path to Leadership” and “What’s in Your Box? Designing the Life You Want.”

Dr. Singh has received numerous awards, including the 2013 Diversity MBA Top 100 under 50 Diverse Emerging Leaders, The Network Journal 25 Influential Black Women in Business Award for 2014 and recipient of the Ellis Island Medal of Honor for 2015. She was also inducted into the Maryland Women’s Hall of Fame in March 2015. Additionally, she was featured on the Today show for her history-making leadership team and named as one of InStyle’s Badass 50 in July 2019.

On January 28, 2019, she returned to Anne Arundel County to fulfill her dream of becoming Fire Chief in her home department. Chief Wolford received her bachelor’s degree from Shepherd University and a Master’s Degree in Management and Organizational Leadership from Western Governors University.

She received her Paramedic certification from Anne Arundel Community College in 2009 and continues to be a Nationally Registered Paramedic. She is a graduate of the Executive Fire Officer Program at the National Fire Academy and a graduate of the International Association of Fire Chief’s Fire Service Executive Development Institute (FSEDI) and holds a CFO and CFM designation from the Center for Public Safety Excellence (CPSE). Chief Wolford is a member of the International Association of Fire Chiefs Human Relations Committee, Chair of the Professional Development Committee and the National Fire Academy Liaison for the EFO Section Committee.

(If you do not receive your link by 4 p.m., March 29, please contact Lisa Byrd, Director of Events and Business Development, at lisab@gbc.org.)