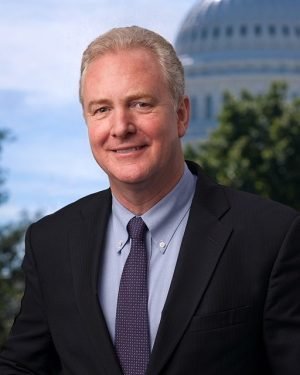 Join the Greater Baltimore Committee on October 18, 2019 for a discussion with U.S. Senator Christopher J. Van Hollen Jr. about top federal issues that are currently being debated in Washington, D.C., the important election year on the horizon and more.

Hear why Senator Van Hollen believes the call between Donald Trump and the President of Ukraine constitutes “an abuse of power and a threat to our democracy.”

Sen. Van Hollen took office as a United States Senator from Maryland on January 3, 2017. From 2003 to 2017 he served as the U.S. Representative for Maryland’s 8th Congressional District.

Sen. Van Hollen started his time in public service as a member of the Maryland State Legislature. In 2002, he was elected to represent Maryland’s 8th Congressional District. In the House of Representatives, he served as a member of the Democratic leadership and was elected by his colleagues to be the Ranking Member of the House Budget Committee and protect vital interests like Social Security and Medicare.

He is a graduate of Swarthmore College, the John F. Kennedy School of Public Policy at Harvard University, and the Georgetown University Law Center.

For event and sponsorship information, contact Lisa Byrd, Director of Events and Business Development, at 410-727-2820.
This is a members only event.