Each event includes a meet-and-greet, coffee and pastries, photo opportunities and a moderated Q&A. Mileah Kromer, associate professor of political science and the director of the Sarah T. Hughes Center for Politics at Goucher College, and Donald C. Fry, President and CEO of the Greater Baltimore Committee, will moderate the series. 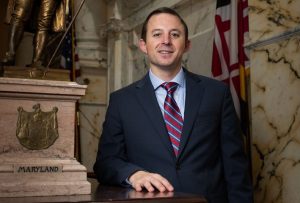 Senator Bill Ferguson was elected to the Maryland State Senate in 2010 and has served as the Senate President since January 8, 2020.

In 2020, his colleagues unanimously elected him to serve as President of the Maryland Senate, making him the second youngest Senate President in Maryland history.

Get your pressing questions answered about what’s most on your mind about the upcoming session, state policies and the outlook for Maryland in 2022.