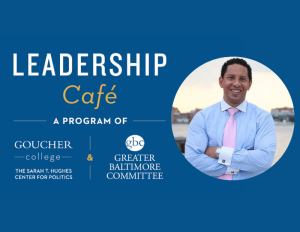 Mileah Kromer, associate professor of political science and the director of the Sarah T. Hughes Center for Politics at Goucher College, and Sharon Markley Schreiber, COO of the Greater Baltimore Committee, moderate the series. 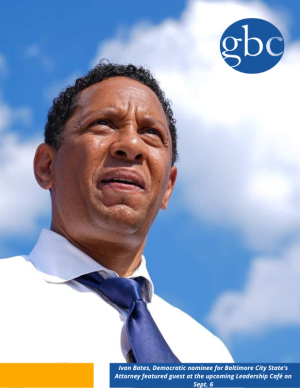 Ivan Bates is a renowned trial attorney and respected community advocate with more than 25 years of experience as both a prosecutor and defense attorney. After serving in the United States Army and earning degrees from Howard University and The William & Mary Law School, Ivan’s first position after passing the bar exam in 1995 was as an Assistant State’s Attorney (ASA) in the Baltimore City State’s Attorney Office.

Ivan was a successful prosecutor who litigated numerous complex cases and his talent soon led him to serving as an ASA in the Homicide Division, where he began advocating for families victimized by violent crime. After his successful service as a prosecutor, Ivan worked for one of Maryland’s premier criminal defense firms where he sharpened his trial skills and advocated for justice for all individuals brought before the criminal justice system.

In 2006, Ivan started Bates and Garcia, LLC and became one of the most sought-after attorneys in the country. Ivan Bates is regarded as a thought leader on the criminal justice system and is often called on by local and national media to share his knowledge and expert opinion on legal matters. Among many high-profile cases, Ivan Bates’ advocacy for the victims of the notorious Gun Trace Task Force (GTTF) helped lead to the federal indictments filed against the officers who betrayed their sacred duty to the residents of Baltimore.