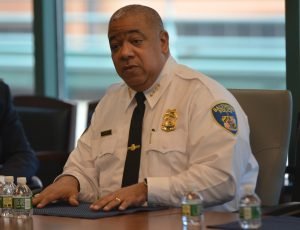 This event is now sold out.

Michael Harrison was appointed Superintendent of Police of the New Orleans Police Department (NOPD) in August 2014 by former mayor Mitch Landrieu and reappointed in May 2018 by Mayor LaToya Cantrell.

He joined the New Orleans Police Department in 1991 and advanced through the ranks of the department, becoming a detective in the Major Case Narcotics Section in 1995, promoted to sergeant in 1998, where he served in the Eighth Police District and then in the Public Integrity Bureau until 2006 when he was promoted to lieutenant, but continued to serve there until early 2009. He was also the assistant commander in the Seventh District in 2009.

In January 2011, he was appointed to the position of commander, where he served as commander of the Special Investigations Division; managing the narcotics, vice, criminal intelligence and gang enforcement units of NOPD. In January 2012, he assumed command of the Seventh Police District, overseeing police services for eastern New Orleans, until he was appointed superintendent.

As Superintendent, Harrison led the NOPD through comprehensive reform while managing the nation’s most robust and expansive police consent decree. Under his leadership, the NOPD manages security for some of the nation’s largest special events; attracting approximately 11 million visitors annually.

He is a graduate of Northwestern University’s School of Police Staff and Command, Senior Management Institute for Police, and the FBI’s National Executive Institute.
In 2017, Harrison was elected by his peers from across the country to serve on the Board of Directors of the Major City Chiefs Association. He is also a member of the International Association of Chiefs of Police, Police Executive Research Forum, National Organization of Black Law Enforcement Executives and recently appointed to the Law Enforcement Immigration Task Force.
Harrison’s bio, courtesy of the New Orleans Police Department.

Find out why it’s essential that every Maryland resident is counted in the 2020 Census. How does it affect federal financial aid for important programs, including health care, housing, transportation and more? What role does business play in the Census count? Join the Greater Baltimore Committee for a conversation with the following panelists: Austin Davis is the Census 2020 Project Manager for the City of Baltimore, working in the Department … Continue reading →
View Calendar
Add