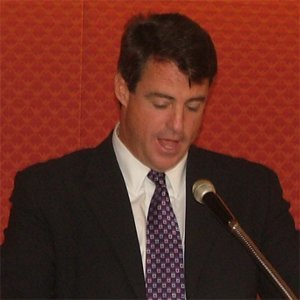 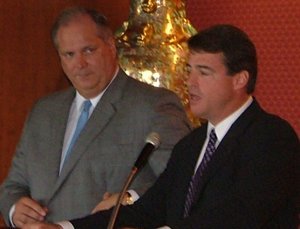 His top reason for seeking the Attorney General’s office was to protect the environment – particularly to save the Chesapeake Bay, Gansler told more than 100 GBC members and guests who attended a GBC public policy luncheon event at the Center Club.

“The bay is really in trouble,” said Gansler. “It’s worse than the rhetoric.”

His office is conducting an environmental audit of the bay to identify the worst polluters and to “try to change the culture of our office” to take legal action against them. That will include finding ways to pressure out-of-state polluters in Pennsylvania who impact the Susquehanna River, he said.

Gansler noted increasing gang activity in Baltimore City as well as the more publicized gang emergence in Maryland’s D.C. suburbs. The gangs in Baltimore are different from the gangs elsewhere in the state. In Baltimore, gangs are based in geographic territories, whereas gangs elsewhere are based more on demographics and ethnicity, he said.

“They fight each other based on where their parents were born,” Gansler said of DC suburban gangs such as MS-13. “What’s really scary about them is that they don’t expect to live past 30,” he said. “They are organized, they are militaristic, and they are violent.”

In some Maryland jurisdictions, “we are not that far away from gunfights in supermarkets,” Gansler warned.

Gang activity is beginning to surface in the schools. One Baltimore middle school principal recently reported that as many as 85 percent of the school’s students were affiliated with gangs, he said.

Consumer protection will remain the “bread and butter” of the Attorney General’s office, said Gansler. Current initiatives include working to address usurious and fraudulent internet marketing and establishing a “code of conduct” at Maryland colleges regarding student loans.

His office also recently started another program, called “Clicks,” to better inform children about dangers lurking on the internet. His office is also working with MySpace and other social web sites to develop a reliable method of age verification for its participants, he said.