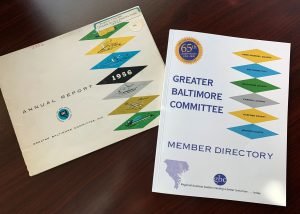 Here are some highlights of the GBC’s efforts through the decades.

In January 1955, 83 business leaders joined together to form the Greater Baltimore Committee, an organization to provide leadership and direction to the growth of the city. Created to be an “action committee dedicated to developing solutions to chronic problems impeding the city’s business growth,”  its founders recognized that “problems of civic improvement in Baltimore are so complex, urgent and diversified” that neither government nor the private sector could address the challenges alone so both must be part of the solution.

In 1956, the GBC was dedicated to alleviating traffic congestion from north and northwest Baltimore into the inner city. The GBC helped to reduce the project’s 10-year timetable almost in half and construction on the Jones Falls Expressway began. 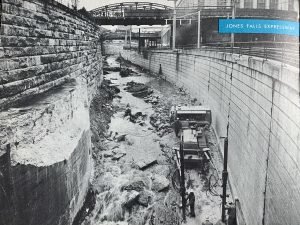 “The Transmittal Message” in the 1956 Annual Report stated: “Baltimore…has taken the lead in the field of Urban Renewal with a plan and pattern for the elimination of slums and blight.”

Charles Center, the GBC’s first signature project, was conceived in 1956 by the GBC Planning Council. The plan called for massive redevelopment of Baltimore’s downtown core.

In 1958, “The Membership Committee selected fifteen outstanding businessmen who have been welcomed as members of the Greater Baltimore Committee.” Among the 15 were: Edward H. Glidden Jr., Architect; Bernard Manekin, Partner, Manekin and Company; and John A. Schwab, Vice President and Regional Manager, The Pennsylvania Railroad Company.

On the topic of Friendship International Airport in 1958, the GBC wrote: “The number of flight schedules has increased steadily, with passenger service increasing at a rate above that of the national average. Pan-American Airlines, as one significant example, has in the last year inaugurated a direct flight to Puerto Rico, a flight that has operated at almost 100% capacity.”

In 1958, The Mass Transportation Sub-Committee noted that “adequate mass transportation is essential to the success of Charles Center and the economic welfare of the entire metropolitan region.”

A note in the 1959 Annual Report stated: “After two years of aggressive action, the Civic Center is to be finally built and can be located at a site readily suitable for its purpose and one that would greatly improve the downtown area.”

In 1964, architect David Wallace produced a plan for a 30-year, $260 million effort to redevelop the harbor’s edge, a project promoted by the GBC. Wallace, a renowned architect, was hired as the GBC Planning Council’s first Director of Planning.

The U.S. Department of Housing and Urban Development released a $22.4 million federal grant for Phase 1 of the Inner Harbor project in 1968.

The Maryland Science Center, which the GBC supported, was completed in 1976, four years before the opening of Harborplace.

The Baltimore Convention Center, championed by the GBC, opened in August 1979. 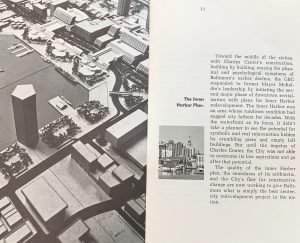 The GBC strongly supported and promoted the idea of redeveloping the Inner Harbor from docks to a world-class modern office and shopping area that would take advantage of the city’s waterfront. With GBC’s backing and promotion in 1966, Baltimore voters approved public funding for the project. Fourteen years later in July 1980, the Harborplace shopping, dining and entertainment area opened in the Inner Harbor, helping further transform Baltimore’s downtown.

In 1983 the GBC launched The Leadership, a year-long “leaders in training” orientation program of seminars, weekend retreats, experiential activities and meetings with some of the region’s most influential individuals.

In discussing “The Transportation Difference,” the 1984 Annual Report stated: “Piedmont Airlines is investing tens of millions of dollars in the Baltimore market. November 1983 saw the completion of almost $800 million in public investment with the opening of the first line of the Baltimore metro rapid transit.”

In a response to the “GBC Difference” in 1984, The Evening Sun wrote: “The GBC task force has raised some critical questions for Maryland. We hope that Governor Hughes, legislative leaders and local officials will now give those questions the attention and effort they deserve.”

Also in 1984, the GBC facilitated the creation of the Development Credit Fund (DCF) to serve minority businesses. The GBC gained commitments from the state’s six largest banks totaling $7.5 million, coupled with direct loan guarantees for minority businesses throughout the State of Maryland. The Development Credit Fund was the first joint public-private financing entity of its kind in Maryland.

The GBC’s first signature project was a bold plan for redevelopment of Baltimore’s downtown core. Conceived in 1956, the GBC won support for the major urban renewal plan from the mayor and the city council. Completed in 1986, the Charles Center project cost more than $235 million — $200 million of which came from private sources.

The GBC was committed to keeping the Orioles in Baltimore and championed the construction of the Camden Yards site. In 1987, the GBC led business efforts to win legislative approval for the stadium project, successfully defeating legal challenges from stadium opponents.

In 1988, the GBC teamed with Baltimoreans United in Leadership Development (BUILD) to create the CollegeBound Foundation, which helps economically disadvantaged youth in Baltimore City to attend college.

The GBC issued its “Smart on Crime” report in 1995. The report advocated for drug treatment on demand as a crime reduction strategy.

NFL football returned to Baltimore in 1996 after the GBC helped to gain the legislative approval needed for a new stadium deal that led to the establishment of the Baltimore Ravens. 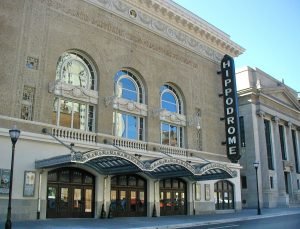 In 1998, the GBC helped to revive the Hippodrome Theatre, originally opened in 1914, by persuading Gov. Parris Glendening and Maryland legislators to include $1.7 million in the budget for project planning. Over the next two years, the GBC led efforts that gained $27 million in state funding and $5 million in private funding. The Hippodrome Theatre at the France-Merrick Performing Arts Center celebrated its grand re-opening on February 10, 2004.

In 1999, in its report “First Things First,” the GBC called on Baltimore City mayoral candidates to adopt a goal of reducing homicides in the city by 50%. The GBC backed up its challenge by creating a $500,000 homicide reduction fund and applied it to funding strategic or tactical initiatives aimed at reducing violent crime and homicides.

In July 2000, the GBC presented a “Managing for Success” proposal to Mayor Martin O’Malley. The project’s intent was to make recommendations that would improve the quality of services provided to Baltimore’s residents. The efficiency of five City departments — Public Works; Health, Housing and Community Development; Recreation and Parks; and Fire — and Baltimore’s information technology structure were examined. The result was 250 significant and impactful recommendations, yielding between $80 and $135 million in reductions to the City’s annual expenses.

GBC President and CEO Don Fry created the Bridging the Gap initiative in 2003 to promote the growth and inclusion of minority- and women-owned businesses. The program provides recognition and support for minority and women entrepreneurs, networking opportunities with industry leaders, updates on best practices for key business management issues, and partnerships that nurture development.

In early 2003, the GBC undertook efforts to raise an initial $1 million to fund the operating costs of East Baltimore Development Inc., the nonprofit group that developed the bioscience research park in East Baltimore. The GBC also lobbied for the creation of a Biopark in West Baltimore. In later years, the GBC advocated for a $300 million University of Maryland Baltimore Biopark.

Another of GBC’s top priorities in 2003 was education reform. In a July 2003 report to Mayor Martin O’Malley, the GBC and the President’s Roundtable were the first to identify significant fiscal management deficiencies in the city’s public school system and to outline strategic remedies for them.

In 2003 and 2004, the GBC identified the need for dramatic improvements in transit in order to remain competitive for workforce and business development. In the 2004 General Assembly session, the GBC gained commitments from Gov. Robert Ehrlich and state legislators to earmark more than $243 million to begin planning the light-rail Red Line. Later in 2004, the GBC and a coalition of civic and environmental associations formed the Baltimore Transit Alliance in order to support the Red Line project.

On April 11, 2008, the GBC, along with bioscience industry advocates and others in the community, celebrated the opening of the John G. Rangos Sr. Life Sciences Building. This was the first bioscience building in the Science + Technology Park at Johns Hopkins in East Baltimore.

In 2010, the GBC, in collaboration with economic development professionals from around the state, issued a report entitled “Gaining A Competitive Edge,” outlining eight core pillars to improve the Maryland business climate and make the state more competitive for business and job creation.

Building on these pillars, the GBC issued the “Compact for Competitiveness, a 2013 report which outlined a shared strategy for private and public sector leaders to strengthen Maryland’s competitiveness for economic prosperity, business development and job creation.

In 2015, the GBC started the Coalition for a Second Chance. The group of experts from the public and private sectors examine barriers to employment for those returning to society from a period of incarceration, as well as other policy issues tied to reentry to these individuals, often referred to as returning citizens. The goal of the coalition is to educate employers on the business case for hiring returning citizens.

Initiated by GBC President and CEO Donald C. Fry, the Baltimore Women’s Advisory Board was launched in 2018. It was co-founded by GBC Board Members Christine Aspell, Managing Partner for the Baltimore Office of KPMG, and Sabina Kelly, Greater Maryland Market President, Bank of America.

The GBC welcomed its inaugural Next Up class in 2018. The program offers leadership training, professional development and networking opportunities for young professionals nominated by GBC member company CEOs. 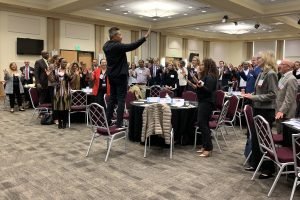 The GBC held its inaugural Bridging the Gap Diversity, Equity and Inclusion Summit in 2019. Dr. Steve L. Robbins was the keynote speaker.

In 2019, the GBC, Baltimore City government leaders and others from throughout the region joined together to ensure the Preakness Stakes remains at Pimlico Race Course. The GBC supported legislation to create a Pimlico Race Course Study Workgroup and opposed a bill that would allow Racetrack Facility Renewal Account funds to be used to build a “super track” at Laurel Park. While both bills were unsuccessful, the GBC was pleased when a historic agreement was made to preserve the running of Preakness at Pimlico in 2019.

In 2020, the GBC was instrumental in advocating in the General Assembly for the passage of legislation that would keep the Preakness Stakes in Baltimore. The GBC supported the visionary proposal advanced by the City of Baltimore and Maryland Jockey Club/Stronach Group to redevelop the Pimlico Race Course to provide year-round community benefits to the Park Heights area and preserve the Preakness Stakes in Baltimore.

Another major project of the GBC in 2020 was the Regional Workforce Development Initiative. The initiative was created to ensure that the region’s workforce will have the employees and skills needed to remain competitive in the future. The project involves a multi-phase analysis to examine the region’s future workforce needs in high-growth, high-demand industries and to identify the skills that will be required to meet those needs over the next 10 years.

Following the death of George Floyd while in police custody in Minneapolis, Minn., in 2020, the GBC issued a statement about racial equity and social justice that stated, “The GBC stands with all in the Greater Baltimore community and throughout the state and nation who demand justice for Mr. Floyd and his family. We mourn the tragic loss of George Floyd, Ahmaud Arbery, Breonna Taylor and so many others, like Freddie Gray, who have died as a result of misconduct and prejudice. The protests and demonstrations in Baltimore and across the country are filled with frustration, trauma, anger and tears. These emotions are an understandable reaction to the individual and systemic racism that is regrettably pervasive in American society. The GBC is devoted to building bridges for racial unity, working towards solutions to address systemic societal inequities, demanding just and responsible policing in Baltimore and beyond and building more equitable and inclusive workplaces. The GBC encourages all GBC members to support and work for racial equity, justice and peace during these challenging times.”