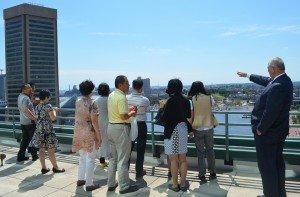 During a trip to the United States, a 14-person delegation from the Tianjin Administrative Institute, a university sponsored by the Tianjin city government, visited the Greater Baltimore Committee to learn about regional economic growth and the importance of maintaining the Chesapeake Bay shipping channel as an integral element supporting business and growth.

During their Aug. 25 visit to Baltimore, the 14 educators from northern China also learned about the GBC’s role in promoting economic development in Greater Baltimore, the Baltimore Metropolitan Council and the Maryland Port Administration.

Donald C. Fry, president and CEO of the GBC, told the delegation, through an interpreter, about the role of the GBC as a business advocacy organization for the Greater Baltimore region.

They also heard from officials from the Baltimore Metropolitan Council (BMC), who explained their organization’s role as a regional planning organization.

The delegation was eager to learn about which industries in the region stand out, about the medical research that takes place at the region’s health care institutions and how the BMC is funded.

They also heard from Maryland Port Administration officials who provided an overview of the port’s Dredged Material Management Program (DMMP) and related environmental initiatives. The delegation was particularly interested in learning about the port’s ecological efforts pertaining to Hart Miller Island, where MPA used to deposit shipping channel dredgings from the bay, and Masonville Cove, an urban wilderness conservation area.

Questions regarding the port also included how much money the port invests in DMMP, specifics related to dredging and how the port maintains economic competitiveness.