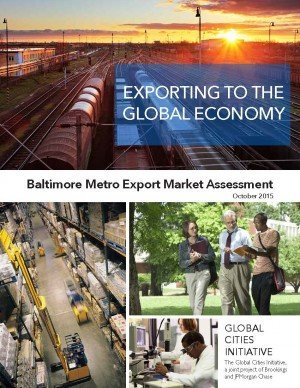 The Greater Baltimore Committee and four partners released an export market assessment on Oct. 19, which found that while the Baltimore Metro area lags other metro regions in the U.S. when it comes to exporting, there is a lot of untapped potential that could be leveraged.

The assessment of the Baltimore metro market’s current exports and potential was released at the GBC’s annual Economic Outlook Conference at the Hyatt Regency Baltimore.

At the conference Marek Gootman, Fellow and Director, Strategic Partnerships and Global Initiatives for the Brookings Institution, and Donald C. Fry, President and CEO of the GBC, discussed how the Greater Baltimore region can expand and improve export activities to stay competitive in today’s global economy. Richard E. Cripps, CFA, Chief Investment Officer for Stifel, made projections for the Maryland and regional economies.

The event – themed “Expanding Into Global Markets: Exporting your Goods and Services to Grow your Business” – includes these highlights and observations: 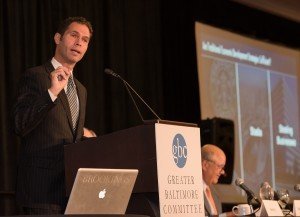 Marek Gootman of the Brookings Institution said thinking about exports from a global perspective is imperative “because the focus on traded sectors and exports is needed to sustain quality economic growth.” 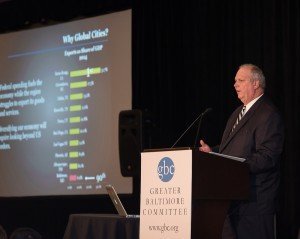 Donald C. Fry, President and CEO of the GBC, said the rationale for why the Baltimore metropolitan region is ripe for an export plan is because the region has relied heavily on federal government and defense funding. He noted that the assessment included five key findings. 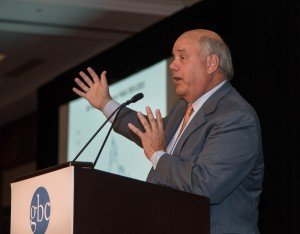 Richard E. Cripps of Stifel offered projections for the Maryland and regional economies.

Read about the project here.