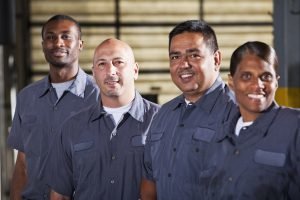 A new report by the Greater Baltimore Committee outlines specific initiatives that public and private sector employers and elected leaders can take to remove barriers to employment and expand job opportunities for men and women returning to society after incarceration.

A key benefit to expanding job opportunities for these returning citizens: Prevent them from falling back into crime, a long-standing issue for Baltimore.

As noted in the GBC report, Opening Doors to a Second Chance: Removing barriers and cultivating job opportunities for returning citizens and job seekers with a criminal background, thousands of people released from incarceration come to the city each year, presenting a significant potential pool of workers who need and want employment.

Matching more of these job seekers with employment would save Maryland on some of its $1 billion in annual prison expenses and help alleviate the significant financial and emotional burden imprisonment has on families, especially the children of incarcerated men and women, the report notes.

“Virtually every expert and study on reducing recidivism agrees that a linchpin for returning citizens to break this cycle is obtaining stable employment as quickly as possible,” notes the GBC’s report.

The report was developed over the past year by the Coalition for a Second Chance, a group of 24 experts from the public and private sectors convened by the Greater Baltimore Committee to examine barriers to employment for ex-offenders and public policy and other initiatives that could remove or help overcome them.

Organizations that worked with the GBC on the report include the Job Opportunities Task Force, Abell Foundation and Living Classrooms Foundation. The Coalition’s work included considerable research and meeting with human resources experts at 16 companies in the Baltimore area. The report is meant to serve as a blueprint for strategies to improve the life of returning citizens.

The coalition is lead by Donald C. Fry, President and CEO for the GBC, and Shaina Hernandez, Director of Local Government Affairs and Strategic Initiatives for the GBC.

“Many returning citizens earnestly want a job,” Fry said. “They just need someone to open the door so they can have a second chance and move in a new positive direction.

“As this report underscores, employers in the Baltimore region could be doing more – and are willing to do more – to provide that second chance. They just need the education and guidance to make it happen. Meanwhile, many of these returning citizens can bring dedication and hard work to employers,” Fry said.

Along with a background that includes a criminal record, returning citizens also face seemingly insurmountable hurdles that make it difficult to gain employment, the report notes.

These barriers include employer reluctance, discriminatory or unfair hiring practices and difficulty with housing and transportation to major job hubs. In addition some individuals returning from incarceration are not aware of services available to help overcome hurdles and find employment.

Those who are awaiting trial and are unable to meet onerous bail demands also face tough odds with jobs and family obligations, the report notes.

Many employers are not aware of the “positive outcomes and benefits associated with hiring individuals with a criminal background,” the report states.

Despite these and other barriers, the GBC report found that many employers in Baltimore are receptive to hiring those with a criminal background. These employers also were open to having managers and other employees educated about the many benefits of hiring such employees and reviewing data on how successful they are for an organization and advancing their skills.

To ensure more employers in the public and private sector are receptive to considering and hiring job applicants with criminal backgrounds, the GBC’s report includes recommendations to improve the chances of successful re-entry to society, better coordination of public services for returning citizens, and expanding job opportunities in the public and private sectors.

Among some of the key recommendations:

The GBC plans a long-term commitment to working on the issue, Fry said. Initially the GBC will establish a group of experts from the public and private sectors to oversee implementation of the Coalition’s recommendations.

As the GBC report highlights, the issue is a long-term problem that requires a long-term commitment, Fry said.

The GBC – with its independent voice, influential connections in the private sector and ability to work on tough projects long-term – is well positioned to ensure we see lasting change on this issue, Fry said.

“I’m confident our work will help the tough challenges of those looking for a second chance, while also helping employers in the city find and hire loyal, hard-working employees from this valuable pool of returning citizens,” Fry said.

Read what Baltimore’s media outlets are saying about the report: