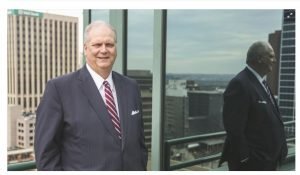 The Greater Baltimore Committee has invited President Donald Trump to visit Baltimore and see the city he has characterized as “rat and rodent infested mess” and a place where “no human being would want to live.”

Donald C. Fry, CEO of the organization which counts some of the region’s most influential business leaders among its members, said he was “extremely disappointed” by Trump’s barrage of tweets criticizing Baltimore and U.S. Rep Elijah Cummings. He called the attacks against Baltimore “unwarranted and inaccurate” and said Trump’s remarks about Cummings, a Democrat whose district includes most of the city, were “unfair and grossly misinformed.”

Fry said the GBC would welcome a visit from Trump so Baltimore’s business community could give him a personal view of the city and show him why Baltimore’s employers and residents “have responded so passionately to defend it.”