The Baltimore Sun: Feds award long-sought grant to help expand Baltimore’s Howard Street Tunnel but not as much as Maryland wanted

By Colin Campbell and Pamela Wood 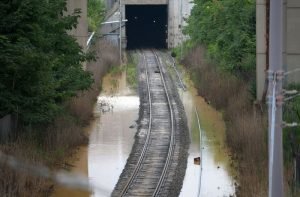 Maryland will receive $125 million in long-sought federal funding to expand the Howard Street Tunnel under downtown — a project that would eliminate a critical bottleneck to the port of Baltimore’s booming container business, officials said Monday.

The money is more than $100 million less than the state and CSX Transportation, the successor to the Baltimore & Ohio Railroad that owns the freight tunnel, asked for, and it’s not clear how the two will make up the difference.

The state and the railroad have proposed spending $466 million, including the federal grant, to increase clearances through the century-old tunnel and at 22 bridges between Baltimore and Philadelphia so freight trains can carry shipping containers stacked two-high.

The grant is a sign that the federal government recognizes the importance of the Howard Street Tunnel expansion to the region, said Donald C. Fry, president and CEO of the Greater Baltimore Committee, a group of business and civic leaders.

“Now we just have to find a way to make up difference,” he said.