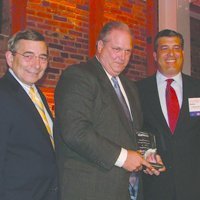 Greater Baltimore Committee president and CEO Donald C. Fry and nominees from 10 GBC-member companies have been named among winners of the Daily Record’s 2009 Innovator of the Year Award.

The Top Innovator of the Year Award went to The Lean Team, St. Joseph Medical Center, for reducing patient wait times in the emergency room by 25 percent.

Fry and the GBC were cited for the 6-year-old Bridging the Gap initiative, which nurtures the development of minority-owned and women-owned business through private-sector initiatives.

Additional Innovator of the Year Award winners from GBC-member companies are:

The Daily Record‘s 2009 Innovator of the Year awards honors innovators that have had a positive effect on their business, industry or community. The 2009 awards program was held October 14 at the American Visionary Art Museum.