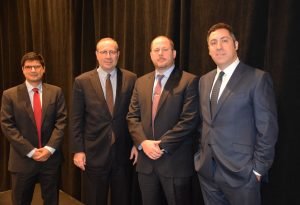 Guest speakers included Tom Barkin, President and CEO, Federal Reserve Bank of Richmond; Andrew M. Schaufele, Director of the Bureau of Revenue Estimates, Comptroller of Maryland; and Bernard Yaros, Assistant Director and Economist, Moody’s Analytics. The conference covered a wide range of topics, including the outlook for the U.S. economy and that of Maryland,  possible outcomes of the U.S. Presidential election in 2020 based on economic and other variables, as well as issues affecting monetary policy.

Barkin opened his presentation by saying “consumer confidence is at an all-time high” and stated that he doesn’t see a recession on the horizon. He did acknowledge that there is a degree of uncertainty and people are feeling less optimistic. “If the current uncertainty is temporary, then the right course of action is to see it through,” Barkin said.

Discussing the Maryland economy, Schaufele noted that it is growing slowly as “a function of the labor force. There’s a lag in amount of productivity and a maturing of the technology revolution.” But, he added, there is room for mid-term optimism due to a “huge entrance to the labor force of Millennials.” Schaufele said that employers and others should invest in Millennials now to fully leverage this new workforce in the future.

Yaros stressed that there are currently more job openings available than there are job seekers, but said the “global economy is slowing down and the U.S.-China trade war has its fingerprints all over it.” While Yaros agreed with Barkin that a recession is not imminent, he said the U.S. “should avoid an outright recession, but the key is the consumer. Consumers can be a fickle bunch. Moods can change overnight.”

Yaros also presented variables that Moody’s tracks to predict if an incumbent Presidential candidate will win the popular vote in each state. The variables include: Non-incumbent turnout, fatigue (when one party has held the White House for two or more terms), national Presidential approving rating and others. The three models are: Pocket Book, Stock and Unemployment. “The average of the three models suggests Trump would win by an even larger [amount of votes] than previously,” Yaros said.

All three speakers stressed the importance of education and training in developing a strong workforce.

See photos from the event at facebook.com/gbcorg.