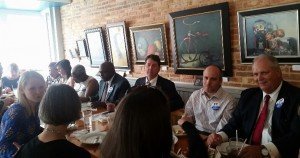 Editor’s Note: This commentary was published on CenterMaryland.org on July 17, 2015.

On Wednesday about 180 employees of Brown Advisory, a Baltimore investment firm, fanned out to more than 15 restaurants in the city to eat, enjoy each other’s company and, well, spend money at local establishments.

In doing so, Brown and its employees took part in the “Boost for Baltimore Restaurants” campaign that the Greater Baltimore Committee organized among its board and membership.

It was our way of providing the corporate and business community with an easy and fun way to provide a needed financial shot in the arm to the city’s restaurant industry, which has had some tough weeks since the civil unrest in late April and the ensuing curfew.

Restaurant managers and owners throughout the city have been reporting slow business since the events of this past spring. The industry is a vital segment of the Baltimore area, employing an estimated 20,000, according to the Restaurant Association of Maryland. In addition to the business owners that benefited from the increased patronage, so did many of their employees, like waitresses and bartenders, who rely heavily on a strong stream of customers for tips and other income needed to support their families.

As President and CEO of the GBC, it was gratifying to see the energy, enthusiasm, and commitment to Baltimore demonstrated by the companies who participated in “Boost for Baltimore Restaurants” day.

But more importantly, the day highlighted what sometimes gets overlooked or unappreciated about Baltimore: The city’s corporate and business community has a way of rallying behind one another when times are tough. Mutual respect and admiration exists among those who are committed to making the city strong.

That’s a great asset to have in an urban city with its share of complex issues and challenges.

All told, it is projected that half of the GBC board of directors and an additional 75 member companies participated, engaging about 1,000 of their employees for lunch or dinner.

Restaurants benefiting from the “Boost” turnout this week ran the gamut, from Gia’s in Little Italy, to Sullivan’s and Capital Grille in the central business district, to Fleet Street Kitchen in Harbor East and to Zella’s in West Baltimore (where I took the GBC staff to lunch), to name just a few.

It’s hard to tally up the economic effect of such a collective effort. But it surely provided a needed economic shot in the arm to city restaurants and their employees.

Hopefully the success of this effort will encourage others in the city to patronize local establishments, to dine more regularly in the city, and to create a mindset in the business and residential communities in Baltimore about the importance of spurring spending in the city.

We need to keep the momentum going.

Tourism attractions, hotels and other city venues that rely on customers coming into the city from around the state, region and elsewhere need all who believe in Baltimore to give it their own boost – even if it’s simply singing its praises to friends, relatives and acquaintances near and far.

Doing so will help the city’s economy stay on the rebound.

Who knows? Active, positive business and community support of our extraordinary assets might also help turn the national conversation about Baltimore around.

Donald C. Fry is president and CEO of the Greater Baltimore Committee and chairman of the Hire One Youth initiative. He is a regular contributor to Center Maryland.