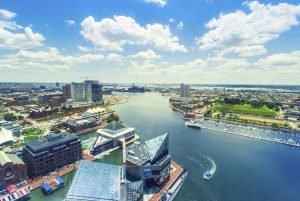 The Greater Baltimore Committee is extremely disappointed in President Donald Trump’s recent demeaning characterization on social media of Baltimore and his unfair attack on Maryland Representative Elijah Cummings, chair of the House Oversight and Reform Committee.

“Baltimore is a great American city made up of hard-working residents and families that are extremely proud of its racial and ethnic diversity, world class educational institutions, top-notch medical research facilities, dynamic entrepreneurial culture and its rich heritage and traditions,” said Donald C. Fry, President and CEO of the Greater Baltimore Committee (GBC).

“President Trump’s characterization of Baltimore was unwarranted and inaccurate.”

Fry further stated that the attacks directed at Rep. Cummings were unfair and grossly misinformed.

“Congressman Cummings is an exemplary public servant,” said Fry, who served with him in the Maryland House of Delegates. “He is without question one of the finest elected officials I have known in my career. He has fought tirelessly on many issues, including racial equality and ethnic diversity, not just for Baltimore and the state of Maryland, but for all Americans. He is not one to shy away from any policy or issue that he feels is wrong or unjust. The GBC was proud to honor him in 2016 with our Courage in Public Service Award.”

Fry said the GBC would welcome a visit from the President so that leading business executives could provide him with a tour of Baltimore’s finest educational institutions, companies, neighborhoods, historic sites and visitor attractions so the President can get a personal view of why Baltimore’s employers and residents have responded so passionately to defend it.

“If the President were to spend just one day in Baltimore talking with residents in the neighborhoods; doctors and nurses at Johns Hopkins, University of Maryland and other outstanding medical institutions; meet with the innovative businesses that are expanding the economy including Under Armour; see the significant private sector investment taking place; and observe the millennials that have chosen to call the city their home, he would see why Baltimore is truly one of the most dynamic cities in America today,” said Fry.