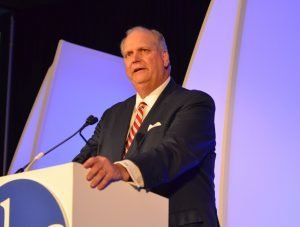 Leaders of the Greater Baltimore Committee focused their remarks on the business community’s continued efforts to bolster Baltimore and the region.

“The theme for this year’s meeting is Focus Forward,” said Donald C. Fry, President and CEO of the Greater Baltimore Committee. “A key attribute of all leaders is that they keep a Focus Forward mindset, no matter the obstacles and the setbacks. The leader presses on, focused.

“We want you to join with us as we Focus Forward in the year ahead,” Fry said. “I am confident that you will find a great sense of accomplishment that comes from working together to support our business community and to move our city, region and state forward.”

Fry made his remarks at the GBC’s 62nd Annual Meeting on May 15 before about 1,000 GBC members and guests who attended the event, held at the Hyatt Regency Baltimore Inner Harbor.

GBC Board of Directors Chair Stephanie C. Hill echoed Fry’s remarks about the focus of the GBC in the coming year.

“The challenges are indeed many. But so are the opportunities,” Hill said. “And that’s what the GBC is all about – turning challenges into opportunities and focusing on solutions, not dwelling on problems. Because of the GBC’s commitment, influence and the quality of its membership, the solutions will come, bringing about change for the better. And the GBC will once again do what it has done for more than 60 years for the Greater Baltimore region: take on the hard issues and challenges of the day. We will lead with a focus directed forward.”

Baltimore Mayor Catherine E. Pugh, the featured speaker at the event, focused her remarks on how the business community can help to move the city forward, specifically improving the quality of life and access to opportunity for all Baltimoreans.

“We’ve got to work collectively to make sure that we’re sharing our resources and understand that when we lift the least, we lift all of us,” Pugh said. “No portion of our city can be neglected.

“The city can’t do this work by itself,” she said. “We need you. We need the business community to continue to be supportive, we need you to help us to invest.”

In addition to addressing how the business community can contribute to Baltimore’s future, the event also celebrated the impact the GBC and its members have had on Baltimore City and the five surrounding counties since its founding in 1955. The GBC has advanced significant economic development projects, developed strategies for change and served as a thought leader and action-oriented advocate for fresh ideas regarding public policies and strategies driving the economic success, vitality and quality of life of the Greater Baltimore region.

The GBC also honored with awards the work of five individuals who, over the years, have made significant contributions to the region.

Since 1997, the GBC has presented Regional Visionary Awards to individuals who have significantly contributed to the betterment of the Greater Baltimore region. The award has been presented to political, education and business leaders for their vision and roles in improving the region.

This year the Regional Visionary Award was presented to Patricia and Mark Joseph for their “passionate approach, exceptional vision and tireless efforts,” which have had a tremendous effect in Baltimore and its communities.

Their contributions include a $1 million grant to Thread, an organization serving challenged Baltimore City public school students and a $3.5 million donation to CollegeBound Foundation. These two gifts are part of more than $10 million that the Josephs have donated to institutions serving Baltimore City students.

The Walter Sondheim Public Service Award is presented to individuals, other than elected officials, who make outstanding contributions to the community without seeking recognition or accolades. Since 2007, the GBC has bestowed awards occasionally but not annually to Ronald Peterson, Fred Lazarus, Bob Bogomolny, Joe Jones, Robert C. Embry Jr., Eddie and Sylvia Brown and Sally J. Michel.

This year the Walter Sondheim Jr. Public Service Award was presented to Calvin Butler and Tim Regan for their work with TouchPoint Baltimore at Mondawmin Mall.

“After the civil unrest in Baltimore in 2015 these executives began a conversation about what they could do to address the isolation and lack of social capital making life hard for some in Baltimore’s communities,” Fry said. “They decided to invest their time and resources to create a place where nonprofits, community leaders, corporate partners and those in need could come together.

Since 2006 the GBC has presented the Howard “Pete” Rawlings Courage in Public Service Award, occasionally but not annually, to honor public officials who demonstrate exceptional courage while serving in elected or appointed public office. 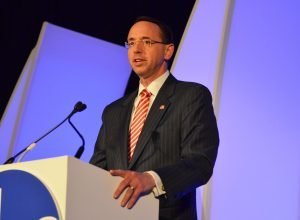 This year the Howard “Pete” Rawlings Courage in Public Service Award was presented to Rod Rosenstein, who was honored for his service as United States Attorney for the District of Maryland from 2005 to 2017.

Rosenstein received the award for his “passion and commitment to protecting the lives of its law-abiding citizens as U.S. Attorney for the District of Maryland,” Fry said.

“During his tenure as U.S. Attorney for the District of Maryland, it was not uncommon to see his picture on the front page with representatives of local law enforcement announcing a major indictment or conviction that they had worked on collaboratively,” he said. “He has indeed given selflessly of his time and talents for the public good.

Watch highlights from the Annual Meeting:

Read what they’re saying about the GBC’s 2017 Annual Meeting: