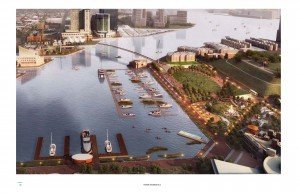 GBC Built Environment and Sustainability Committee members could swivel their chairs toward the windows of the GBC board room to the view of Rash Field’s empty wet beach volleyball courts in front of a snow-spotted Federal Hill and imagine an expansive open lawn lined with shady trees and playgrounds in their place.

Transforming Rash Field into a green space with sculpture gardens, a public beach and children’s play areas is one of the improvements included in the Inner Harbor 2.0 master plan, which the committee discussed Wednesday morning after a presentation by Laurie Schwartz, president of the Waterfront Partnership of Baltimore and project manager of Inner Harbor 2.0, and Jonathan Ceci, director of the landscape architecture studio at Ayers Saint Gross.

“Few people recognize that the inner harbor is a park because there aren’t enough free activities and amenities,” Schwartz said. The group behind Inner Harbor 2.0 has included in its plan lots of quality open spaces, landscaping and more connectivity to develop an area where tourists and residents will want to come and spend time.

The Inner Harbor 2.0 group turned to Ayers Saint Gross to develop a master plan for the project, which was unveiled after months of research and development in November. Ceci – who has a master’s degree in landscape architecture from Harvard University and has created landscapes on former industrial sites, historic properties and college campuses across the country – emphasized the ability of adding parks, playgrounds and improved infrastructure to create a “fresh outlook” for the inner harbor.

“A lot of thought was put into the placement of playgrounds and parks,” Ceci said. The Inner Harbor 2.0 group had 25 to 30 meetings with stakeholders and community leaders over the past year to get the best understanding of what was most important to consider while preparing a master plan.

One of the changes receiving some of the most vocal push-back is the removal of the seven beach volleyball courts at Rash Field. Ceci and Schwartz discussed possible solutions, such as finding a larger waterfront area in another part of the city for even more beach volleyball courts than are currently at Rash Field (members of Baltimore Beach Volleyball had already requested more courts be added, and using so much prime waterfront space for an activity with such a short season does not seem like the most effective use of the space, according to those involved with Inner Harbor 2.0).

Another issue of the plan is the traffic changes that would have to happen if the diagonal cut-through from Light Street to Pratt Street is eliminated, as included in the plan. Ceci noted such details can change.

“It’s a master plan; it needs to be flexible,” Ceci said. “Design details will evolve.”

Other parts of the master plan include updates to the promenade to close up missing links along the walkway, the addition of a Chesapeake Bay ecosystem in Area 10 near the National Aquarium and a pedestrian bridge connecting Rash Field to Pier 6.

Schwartz and other stakeholders are now in the process of fundraising. Government funding has already been secured ($2 million from the state, $17.25 million from city and $18 to 20 million from the Parking Authority Board), and the steering committee is working to find private funding.

For a full version of the master plan, click here. 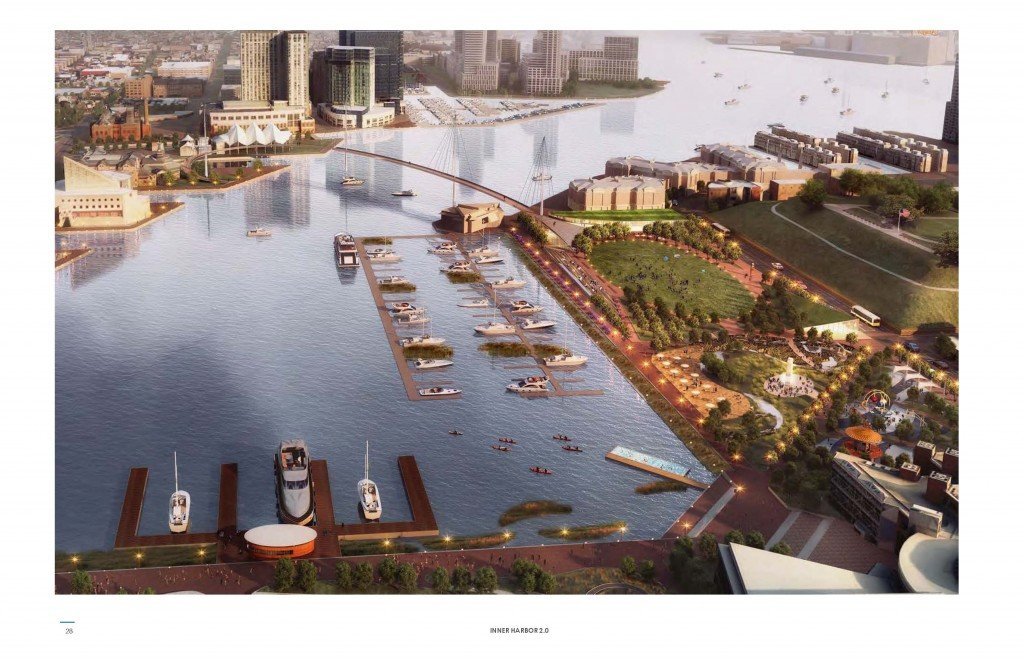