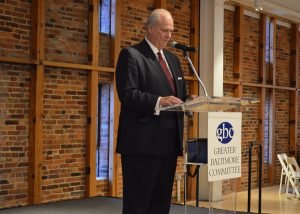 December marks the Boy Scouts of America Baltimore Area Council’s 41st Annual Henry A. Rosenberg Sr. Distinguished Citizen Award ceremony, a virtual event dedicated to promoting local Scouting programs while honoring a community leader who reflects the values and teachings of the Boy Scouts. “To be recognized by the Boy Scouts is just incredible,” says this year’s recipient of the award, Donald C Fry. As President and CEO of the Greater Baltimore Committee, Fry directs programs and initiatives dedicated to bolstering the regional economy, preparing businesses for success and connecting sectors of the community in order to strengthen the Baltimore region for all who live in it.

Although Fry was only a Scout for a short time in his youth, he exemplifies the core values of the Boy Scouts through his work at the Greater Baltimore Committee. Fry has served as the President and CEO of the organization for 18 years; for him, traits such as integrity and a strong sense of character are integral to business and community leadership. “We try to stress that it is important for corporations to be engaged in the community and why it is important for individuals to be engaged in the community, because that leads to a more ethical society – when you are actually doing work that does not just benefit you personally, but the community at large,” he explains.

A prominent example of the organization’s community engagement is its Bridging the Gap program, founded under Fry’s leadership in 2003. The program works to promote women and minority-owned businesses in the Greater Baltimore region and provide them with tools needed to become integral parts of the region’s economy. For Fry, supporting minority and women-owned businesses is a key to strengthening the economy. “I sometimes equate the economy to a car engine,” he says. “If all the valves in the engine are not working together, [it] sputters along. It is the same with the economy … It is important that we get all segments working together, [and] minority and women-owned businesses are a key component of that.”

In addition to racial equity and social justice, Fry lists public safety, transportation, education and workforce needs as causes close to the Greater Baltimore Committee. Throughout the organization’s 65-year history, Fry asserts that the Committee has never swayed from its key tenants. “Our mission statement has remained the same: to bring the corporate and civic communities together by finding solutions to problems that affect our competitiveness and viability as a region,” he states. “I don’t think there is one particular style of leadership,” Fry says. “I think leadership adapts to how a situation presents itself at the time with the people that you have.” With the pandemic causing businesses around the world to make swift and drastic adjustments, the Greater Baltimore Committee has devoted even more care towards assisting small, local businesses. “Large companies often times have the capacity internally to make changes or adjustments, but small businesses with a smaller workforce do not have the same capacity,” Fry explains. “We’ve created a COVID-19 Business Recovery Advisory Council … to develop programs and assistance to small and minority-owned companies so that they cannot just reopen their businesses but recover their businesses.”

Throughout his career, Fry has received accolades including Innovator of the Year and three-time recipient of Maryland’s Most Admired CEOs by the Daily Record, inducting him into its Circle of Leadership. His accomplishments have also led to his inclusion among the Baltimore Business Journal’s Power 10 CEOs and landed Fry in the book, Legendary Locals of Bel Air. He is also a three-time recipient of the Influential Marylander in Civic Leadership Award by the Daily Record, which led to his induction into the news source’s Circle of Influence. Regarding such success, Fry assures that he has been extremely fortunate to have the assistance of his team members at the Greater Baltimore Committee. “Anyone who has received awards and recognition [knows they are] because of the strong staff and employees who work with them,” he says. “You never accomplish anything alone … I’ve been fortunate over the years to have an extraordinary staff who produces remarkable work in the areas that we have become engaged.”

When asked what receiving the Henry A. Rosenberg Sr. Distinguished Citizen Award means to him, Fry responds, “It means a lot to me … The Rosenberg family has been a strong family in the Baltimore region for many years, and the Boy Scouts is an organization that has significant influence and guidance on the development of young people. When I look at the other recipients of the award from previous years, [I see] it is replete with incredible corporate and civic leaders, so for me to be included in those ranks is a very humbling experience and one I am very proud of.”

To read the complete story, go to i95business.com.