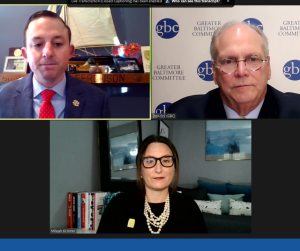 The top economic priority for the upcoming 2022 Maryland General Assembly session, which will commence on January 12, will be ensuring the state’s economy remains competitive and supporting policies that promote workforce development and educational pathways that lead to careers, said Maryland State Senate President Bill Ferguson during a virtual Leadership Café event hosted by Goucher College and the Greater Baltimore Committee on January 4.

Senate President Ferguson explained that the workforce is the single most important issue in terms of economic development. He said, “It is the people of Maryland that make or break our economic future, and so I think, making sure that we have the workforce development and educational pathways that lead to lifelong learning and lifelong competitiveness is the most important thing that we can do to keep, retain, and grow businesses here in Maryland.”

Other issues likely to be debated during the session include what Senate President Ferguson called the “Four Cs.” They are:

The Baltimore Democrat also said legislators will discuss steps they could take to help Baltimore City’s mayor and city council address the continuing population loss. The 2020 census showed a drop of almost 6% in the city’s population since the 2010 census.

The former educator expressed concern about the impact the pandemic is having on youth mental health and that there is not a “good vision” for improving transportation in the Baltimore region, despite the fact that the state will be seeing a funding windfall from the federal infrastructure bill passed by Congress last year.

The event was moderated by GBC President and CEO Donald C. Fry, Goucher President Kent Devereaux and Dr. Mileah Kromer, associate professor of political science and the director of the Sarah T. Hughes Center for Politics at Goucher.