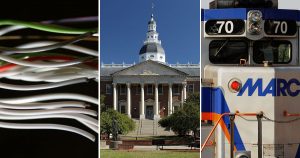 The COVID-19 pandemic highlighted stark inequities among Maryland residents in their ability to access these key infrastructure components that are vital to economic success. Multiple bills were introduced during the session to expand high speed internet access, also known as broadband, and to adequately maintain and expand transit infrastructure.

The Greater Baltimore Committee (GBC) supported many of these bills as they increase the ability of Maryland residents to fully participate in education, employment and training opportunities, which will improve the overall economy of the Greater Baltimore region and address racial and social disparities.

Also, in late March, Governor Larry Hogan, House Speaker Adrienne Jones and Senate President Bill Ferguson announced a bipartisan plan to allocate funds from the federal American Rescue Plan Act. Broadband access was one of eight priority policy areas earmarked to receive more than $100 million. The bipartisan plan allocated $300 million to be invested in a broadband technology initiative to ensure every Marylander has access to high speed internet. Disbursement of the funds will be overseen by the newly created Office of Statewide Broadband.

House Bill 114/Senate Bill 199 — Transportation – Maryland Transit Administration Funding and MARC Rail Extension Study (Transit Safety and Investment Act) would dedicate over $2 billion to the Maryland Transit Administration from fiscal year 2023 to 2029 for capital funding projects and repairs. It also would require Maryland’s Department of Transportation to study expanding MARC train service into Western Maryland. The Greater Baltimore Committee supported this legislation, which passed the House and Senate during the 2021 session. However, Governor Hogan vetoed the measure in late May. It remains to be seen if legislators will attempt to override the veto when they reconvene for the 2022 session.

Another bill, House Bill 414/Senate Bill 81 – Southern Maryland Rapid Transit Project – Funding, grants funding for an environmental impact study and planning to the Southern Maryland Rapid Transit Project. The bill allocates $5 million annually for fiscal years 2023 to 2027. This legislation passed both houses and was enacted without the Governor’s signature in late May.

Equitable funding for expanding broadband access was a legislative victory for the entire state. But the veto of the Transit Safety and Investment Act was a disappointment as the Baltimore region continues to lag behind in state investment in maintenance and expansion of transportation infrastructure. The GBC will continue to work with its partners to advocate for adequate and equitable infrastructure funding for the Baltimore region.