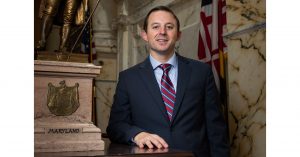 “We are 40 out of 50 states in our distribution of the vaccine. If look at the number of doses that we have received versus those that have been administered, we are 49 out of 50 states,” Ferguson said at a virtual panel discussion hosted by the Greater Baltimore Committee (GBC). “So in the state that has some of the greatest health care on the globe, that has the best public health institute on the globe…we are 40 out of 50 states in the administration of this vaccine and 49 out of 50 if you look at how much we have received and how much we have actually gotten out.”

Ferguson said the most important issue the General Assembly will deal with this legislative session is the oversight of vaccine distribution because that singular issue affects all of the other issues that lawmakers must address.

Last week Ferguson announced the formation of a workgroup that will oversee the Department of Health’s stewardship of  vaccine distribution. At that time Ferguson noted that Maryland had received 565,000 vaccines from the federal government and that about 370,000 vaccines had yet to be used. The workgroup is scheduled to hold its first meeting Jan. 25 at 4 p.m. EDT. Also Jan. 25, the state will enter Phase 1C of its vaccination plan, which will allow all Marylanders between ages 65-74 as well as some essential workers-to be vaccinated.

Ferguson has blamed acting Health Secretary Dennis Schrader for the arguably slow pace of vaccine distribution and has said that it would not be “fair” for the Senate to confirm Schrader at this time.

Ferguson said equitable distribution of the vaccine will also be a major focus for lawmakers.

“We have seen a disproportionate health outcome of the pandemic on black and brown communities across the state of Maryland. I think we are going to spend a lot of time trying to figure out exactly why that is. But what we do know is that the existing inequities that existed prior to the pandemic have simply been exacerbated in ways that probably none of us could have ever imagined.”

Senate Minority Whip Michael Hough (R-Frederick and Carroll) defended the administration’s vaccine rollout plan, saying supply is the main problem and that he expects that to improve once vaccines are made more readily available at local pharmacies throughout the state.

“The number one problem is that we just haven’t been getting enough of the vaccines. That’s first. And the second, in my area, in Frederick County-these local health departments have really just not been equipped to hand these out. So, I think as far as when we get to the private sector, when we get the governor’s plan, which has the Giant Foods, The Wal-Marts and everybody else handing them out-I think you’ll see a greater efficiency.”

Hough went on to emphasize the importance of the private sector in improving the supply chain.

To read the full story, visit the Maryland Reporter website.