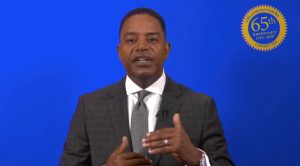 The new chairman of the Greater Baltimore Committee’s board of directors emphasized the need for racial equity and unity amid national protests over the police killings of unarmed African-Americans.

“Favoring one group over another causes societal challenges that limit progress for individuals, communities, and cities. We must all be in this together, interconnected,” Calvin Butler Jr., said in a speech at the group’s 65th annual meeting on October 14 shortly after he was named to that position.

Butler, who is senior executive vice president of Exelon and CEO of Exelon Utilities, said he felt personally affected by the late-May killing of George Floyd at the hands of a Minneapolis officer.

“I remember over the weekend listening to 24/7 news coverage and waking up Monday morning just feeling tired. I called my chief of staff and said: ‘Cancel my meetings for the day. I need time to just sit back and reflect.’”

Butler added: “I never met George Floyd. But I experienced the tragedy of his death so intensely. Down deep, I recognized somehow that he and I were interconnected.”

“2020 has been a year like no other. In addition to the threat to our health and changes to our lifestyles, we have seen acts of systemic racism that have shocked our collective conscience.

Fry added: “Those unconscionable acts have forced us to examine our workplaces, government, and institutions, and to demand that we take action end systemic racism and social injustice.”

Fry highlighted some of the actions the GBC has taken to get the ball rolling.

“To date, the GBC has featured programs on the history of structural racism in America, conducted business roundtable discussions on equity in the workplace, and has stressed the need for advancing equity in public policy areas such as transportation.”

CNN National Correspondent Omar Jimenez, who was a general assignment reporter for Baltimore’s WBAL-TV from 2015-17, relayed some of his experiences covering Floyd’s murder at his current position.

Jimenez was one of three CNN journalists who were arrested covering the protests that ensued following Floyd’s death. Jimenez stressed that private sector investment in minority communities is critical to addressing systemic racism.

To read the full story, visit the Maryland Reporter website.