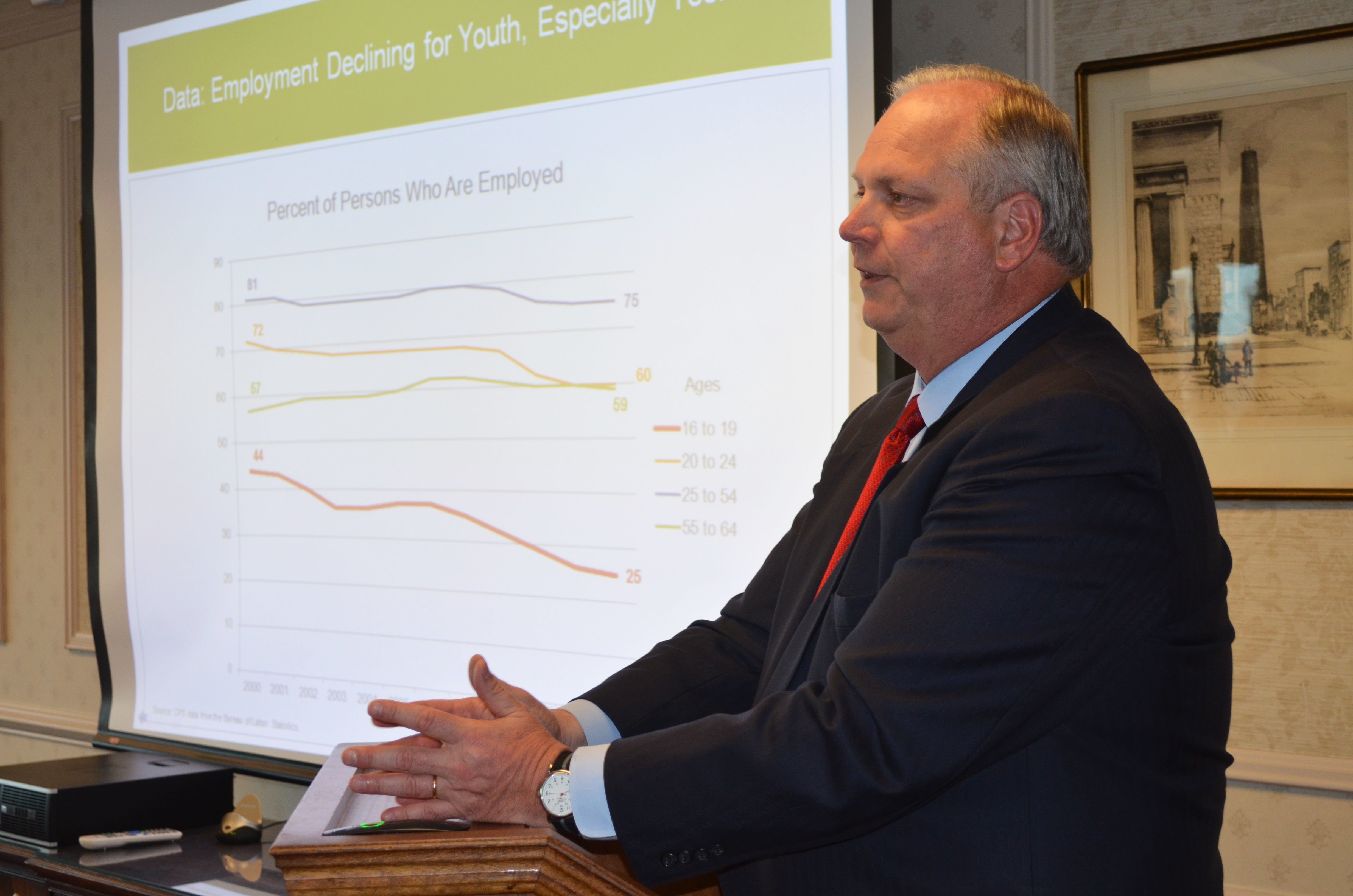 Karen Sitnick, director of the Mayor’s Office of Employment Development, and Patrice Cromwell, director of economic development and integration initiatives at the Annie E. Casey Foundation, also joined Fry to discuss the evolution of the program, the success it had in 2012 and their hopes for 2013 in moving forward and creating more jobs for Baltimore City young people.

Building upon the success of the last year’s inaugural Hire One Youth campaign, Mayor Rawlings-Blake asked Fry and the leadership team, comprised of local business leaders from a variety of industries, to double the number of employers to 160 directly hiring a minimum of 500 young people.

“Hire One Youth is an opportunity for Baltimore to prepare its future workforce,” said Mayor Rawlings-Blake. “This is truly a way for organizations to do well by doing good – not only by giving a young person a chance to earn and learn about the world of work, but also by making an investment in their organization, their industry and Baltimore’s economy.”

“Many local business leaders recognize that participating in Hire One Youth collectively benefits the city and the Baltimore business community as much as it benefits these young workers individually,” said Fry.

The campaign is part of YouthWorks, Baltimore City’s longstanding summer jobs program, and addresses the rising need nationally to connect more teens and young adults to early work experiences. In its recently released Kids Count Policy Report, the Annie E. Casey Foundation details the significant barriers to youth employment across the United States, which, as the report notes, is currently at its lowest level since World War II, with only about half of young people ages 16-24 holding jobs in 2011. The report suggests that the solution to this daunting challenge lies in “business, government, philanthropy and communities coming together to create opportunities to put young people back on track in a dynamic, advancing economy to ensure their success and to build a stronger workforce for the future.”

Baltimore City is attacking this issue through the Hire One Youth campaign. In 2012, Mayor Rawlings-Blake introduced her campaign and challenged Baltimore employers to join the city in creating valuable summer employment opportunities for its younger residents. Encouraging businesses to be more directly involved in creating summer jobs for Baltimore’s teens, Fry and Mayor Rawlings-Blake asked local employers to invest at least $1,200 to hire one 16-21-year-old through YouthWorks.

The campaign was a success. Of the 5,300 young people connected to summer jobs through the 2012 YouthWorks program, 285 of those were hired by 81 Hire One Youth employers. Of those participating organizations, 98 percent reported they would recommend the Hire One Youth program to other employers looking for entry-level workers.

Included among the organizations that have committed to hire at least one young person this summer, are the Baltimore Convention Center, Charm City Yoga, Mercy Medical Center, Stifel Nicolaus & Company, Turner Construction Company and University of Maryland Baltimore.

Hire One Youth is a component of YouthWorks but is distinct in that participants are selected based on their age, 16-21, and existing job skills.

In addition, Hire One Youth employers can:

• Interview several qualified, pre-screened applicants to find the best match for their organization. All Hire One Youth candidates complete six hours of job-readiness training before they begin the interviewing process.

• Offer six to eight weeks of employment, and can pay participants more than minimum wage.

• Hire youth directly and put them on their organization’s payroll, just as with any other employee. Or, Baltimore City can be the employer of record for Hire One Youth hires. Employers just need to send a check to the Baltimore City Foundation to cover the salaries of each Hire One Youth participant hired (at least $1,200 to cover the program minimum of 25 hours per week for six weeks of employment at the minimum wage of $7.25/hour), and YouthWorks will handle the rest.

Businesses interested in becoming a Hire One Youth employer for 2013 can complete the online form.

YouthWorks is operated by the Mayor’s Office of Employment Development with the assistance of employers and workforce partners, and with financial support from a variety of contributors. Each year, YouthWorks connects approximately 5,000 young people between the ages of 14 and 21 to six-week summer work experiences with private sector, nonprofit, and city and state government employers throughout Baltimore. Participants work in a variety of industries, and gain basic workforce readiness and career-specific skills. In 2013, YouthWorks will run June 24 through August 2.