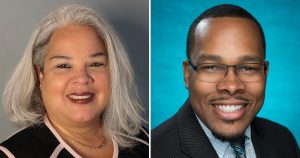 McDaniel College has announced that Rosa Rivera-Hainaj will be joining the college as its new Provost and Eric Simon has been named the new Vice President for Administration and Finance.

Rivera-Hainaj has been selected as McDaniel College’s new provost following a national search. She plans to join McDaniel in July 2021.

“Dr. Rivera-Hainaj is a passionate advocate for student success and clearly stood out for her student-centered approach and dedication to educational access. She is also committed to furthering our diversity, equity and inclusion efforts, and I am thrilled to welcome her as a member of the senior leadership team,” said current McDaniel Provost Julia Jasken, who will become the college’s 10th President as of June 1.

Rivera-Hainaj has most recently served as Associate Vice President of Academic Affairs at Our Lady of the Lake University (OLLU) in San Antonio, Texas.

At McDaniel, she will oversee both academic and campus life. As the Chief Academic Officer, she will have broad responsibility for both the undergraduate and graduate academic programs. She will also be responsible for student programs and services.

Additionally, Eric Simon has been named the new Vice President for Administration and Finance at McDaniel College following a national search.

Simon comes to McDaniel after serving as Assistant Vice Chancellor at the University of North Carolina Wilmington (UNCW). In this role, he has oversight of business operations, facilities, human resources and information technology. He has also been involved on numerous university committees including those focused on campus operations, diversity, strategic planning and pandemic response.

“Eric brings more than 20 years of broad experience in higher education and has a history of collaboration on several different campuses. I look forward to having him on board this summer,” said Jasken.

As a member of the senior leadership team at McDaniel, Simon will serve as the chief financial officer and will provide leadership and oversight of the college’s administrative functions. He will be responsible for budget planning and oversight, campus construction and renovation, management of the college’s endowment and operations, including campus planning, improvements and maintenance, human resources, for-profit rentals and contractual agreements, as well as WMC Development Corporations, the college’s for-profit enterprise. He will also serve as the liaison to the Board of Trustees on the Audit, Finance and Facilities, and Investment committees.

Simon earned both his bachelor’s and master’s degrees from Eastern Michigan University and obtained a Master of Business Administration from Kennesaw State University. He will complete his Ph.D. in Higher Education this summer from Illinois State University.

Pictured: GBC Board Chair Calvin Butler, Thomas Friedman, GBC Vice Chair Mary Ann Scully and GBC President & CEO Don Fry.   Join the Greater Baltimore Committee for its 66th Annual Meeting, the state’s premier business event of the year. Thomas L. Friedman, the foreign affairs columnist for the New York Times, and the author of seven bestselling books, including “Hot, Flat, and Crowded” and “The World Is Flat,” will … Continue reading →
May
26
Wed
9:00 am GBC Newsmaker Speaker Series: A... @ Webinar via Zoom
GBC Newsmaker Speaker Series: A... @ Webinar via Zoom
May 26 @ 9:00 am – 10:00 am

Please join the GBC and Baltimore Police Commissioner Michael Harrison for a conversation on how the Baltimore Police Department and other law enforcement agencies across the country are addressing the calls for major police reform. Commissioner Harrison, who was appointed to the U.S. Conference of Mayors’ Police Reform and Racial Justice Working Group, recently appeared on Meet the Press to discuss the issue of police reform in America. Topics to … Continue reading →
Jun
9
Wed
8:30 am Transportation and Mobility Comm... @ Virtual Meeting via Zoom
Transportation and Mobility Comm... @ Virtual Meeting via Zoom
Jun 9 @ 8:30 am – 10:00 am
To RSVP to committee meetings, email Tara Harris. Zoom registration links will be available prior to each meeting.
View Calendar
Add