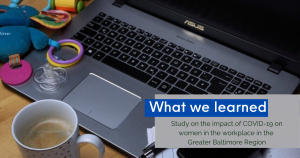 A significant percentage of women in the Baltimore region report being overloaded with work, discriminated against at their workplace, or unsatisfied with their job during the COVID-19 pandemic, according to a two-part survey conducted by the Greater Baltimore Committee (GBC) and Towson University on the impact of the pandemic on women in the workplace.

“The survey results highlight that the pandemic has had a negative effect on women in the workplace in the Baltimore region. Employers run the risk of losing high-quality employees and diversity in the workplace unless they work to understand and address employee needs in this very stressful time for everyone,” said Donald C. Fry, President & CEO, of the GBC. “It’s a workforce issue that deserves deeper understanding and smart solutions.”

Gabby Swab, Ph.D., Assistant Professor in the Department of Management at Towson University, said, “The findings of this survey underscore that many women in the Baltimore region are stressed at work and in their family responsibilities due to the ongoing pandemic. They are looking for support, guidance and communication from employers, with others seriously considering leaving their job.”

The GBC, leadership of the GBC Baltimore Women’s Advisory Board (BWAB) and researchers at Towson University explored and discussed the findings today with GBC members and BWAB’s general membership. Additional public events are being planned to explore possible recommendations for employers to consider to help address employee issues and concerns raised in the survey.

The survey initiative was overseen by the GBC BWAB after internal discussions regarding national data which showed that more than 2 million women have left the workforce since the pandemic began. About 80% of survey respondents were female and 20% were male.

Regarding turnover intention, researchers found that a lack of organizational support during the pandemic “significantly” contributed to plans to leave a current job. Turnover intention was seen across all industry sectors covered in the survey, except professional services.

Researchers also found that discrimination has “played a large role in the general stress of employees over the past year,” and that all forms of discrimination tested (race, gender, age) contributed to plans to leave a job.

The GBC and BWAB plan to develop programs and events to help organizations in the area find solutions to issues raised in the survey findings.

ABOUT THE GREATER BALTIMORE COMMITTEE

ABOUT THE GBC BALTIMORE WOMEN’S ADVISORY BOARD

Towson University is the largest university in Greater Baltimore and Maryland’s fastest-growing university.

TU is an anchor institution with 23,000 current students and more than 100 bachelor’s, master’s and doctoral degree programs in the liberal arts and sciences and applied professional fields.

Undergraduate research and experiential learning in an inclusive environment are among TU’s hallmarks. TU enjoys an increasingly diverse campus, reflective of its surrounding community of greater Baltimore and the State of Maryland, through an institutional commitment to inclusive excellence where all students thrive and reach their fullest potential.

Towson University is also nationally ranked for student diversity and social mobility and is one of only a handful of institutions where graduation and retention rates are the same for all students.

TU is widely recognized as one of the best values in higher education. TU is a beacon and powerful catalyst in the Mid-Atlantic region partnering with hundreds of businesses and organizations, impacting communities and fueling change.