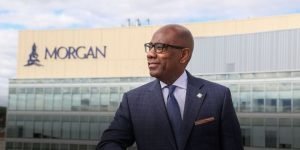 “Dr. Wilson has a wealth of experience and is a proven leader on the Division I level,” said MEAC Commissioner Dr. Dennis Thomas. “He will be a tremendous asset to the NCAA Division I Board of Governors and Directors.”

Dr. Wilson calls his appointment to the committees “a unique opportunity.”

“It is a great honor to be appointed to the NCAA’s highest governing body and presented the unique opportunity to enhance the quality of the student-athlete experience while working to expand the understanding of the challenges faced by those in higher education with limited resources,” Dr. Wilson said. “I look forward to working with my colleagues on the Board of Governors to ensure that our student-athletes are students first. I humbly accept this worthy opportunity to represent the best interests of our amateur athletes with integrity and fairness.”

Dr. Wilson’s achievements as a leader of Maryland’s preeminent public urban research university have clearly been strong, but it is the character he brings to the presidency, a character shaped by the intangibles of his background, that is perhaps most impressive of all.

Dr. Wilson’s educational philosophy is to put the students’ experience first. As a leader, he is a consensus builder and a strong believer in transparency of process. His goal is to make Morgan State a leader in producing the next wave of innovators in the U.S. Under his guiding leadership, Morgan has experienced record growth in campus development, research and development, enrollment, retention and graduation, academic progress and University fundraising, including the successful completion of an historic $250 million Sesquicentennial Anniversary Campaign.

Dr. Wilson has also been honored and recognized as a leader in higher education. Most recently, he received the national Boy Scouts of America’s 2018 Whitney M. Young, Jr. Service Award presented by Baltimore Area Council, BSA, and he was named to the Maryland Daily Record newspaper’s Circle of Influence for being selected as an “Influential Marylander” on three separate occasions (2018, 2016 and 2011). He was also named to the Baltimore Business Journal’s 2019 Power 10.

No stranger to service, Dr. Wilson has served as the Chair of the Mid-Eastern Athletic Conference (MEAC) Council of Chief Executive Officers (CCEOs) for the past two years, and he currently serves on the NCAA Division I Presidential Forum in a term that lasts until August 2021.   Additionally, he was elected to the Lumina Foundation’s Board of Directors in January 2018. Prior to that election, the U.S. Under Secretary of Commerce for Standards and Technology had appointed him to serve a three-year term as a member of the National Institute of Standards and Technology’s (NIST’s) Visiting Committee on Advanced Technology.

Dr. Wilson is a former chairman of the HBCU/China Network, a member of the Maryland Cybersecurity Council and the Maryland Longitudinal Data System Governing Board and he serves on the Boards of Directors of the Greater Baltimore Committee, the Association of Public and Land Grant Universities and the Association of American Colleges and Universities. In 2010, President Barack Obama appointed him to his 11-member Board of Advisors on Historically Black Colleges and Universities (HBCUs).  He also served on the Board of the United Way of Central Maryland.

As a member of the NCAA Board of Governors and Division I Board of Directors, Dr. Wilson will sustain and advance the Association’s mission, traditions, values and reputation.

About the Mid-Eastern Athletic Conference