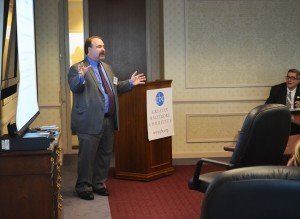 In the year since Paul Comfort’s appointment to lead the Maryland Transit Administration he has focused on better serving the thousands of people who rely on public transportation and a new transit plan to improve the region’s connectivity.

“We have 380,000 unlinked passenger trips a day on an average weekday – two-thirds of them are on bus,” Comfort said. “Our subway is our second most ridden mode and that has about 45,000 passengers a day.”

Comfort made his remarks to more than 50 Greater Baltimore Committee members at the GBC’s Newsmaker Breakfast series event on April 21.

Last spring, Governor Larry Hogan announced Comfort’s appointment as Administrator and CEO of the Maryland Department of Transportation’s Maryland Transit Administration. Prior to that, Comfort served as the Director of Operations/Assistant Project Manager at the Washington Metropolitan Area Transit Authority’s MetroAccess Service for MV Transportation.

When he took the MTA’s top job Comfort said he observed “very poor” bus performance – MTA busses serve 260,000 passengers each day – and repeatedly heard that the busses were late and dirty and drivers were unfriendly.

“We needed to improve what we were doing so we could improve our brand equity,” he said. “We also were not a unified interconnected system.

“We are trying to serve our existing customer base by giving better service but also attract new riders by providing what they want – the busses are clean, the busses are on time and the drivers give great customer service,” Comfort said. “That’s our goal.”

He also discussed the new $135 million BaltimoreLink transit plan which has been developed with the goal of creating an interconnected transit system. It redesigns the local and express bus systems throughout Baltimore and adds 12 new high-frequency bus routes.

“Instead of routes going across the city back and forth, now they come into a hub and come back out,” Comfort said. “It’s changing the model.”

Express BusLink service, which aims to improve suburb-to-suburb connectivity, is expected to launch in June and BaltimoreLink full project implementation is expected in June 2017.

The new transit plan will allow for access to more jobs. There are 745,000 jobs in the Baltimore region; 150,000 of them are in downtown Baltimore, Comfort said.

“We redesigned where the routes go to serve more jobs,” Comfort said. “One hundred thirty one thousand more jobs under this system would now be accessible via high frequency transit, meaning the bus will come every 10 minutes.”

Increasing bus frequency is important because transit is a “lifeline” for hundreds of thousands of people in the region, he said.

“If we don’t do it right it negatively impacts their lives,” Comfort said. “We’re going to have a safer and cleaner system, a unified system of new high frequency routes that connect seamlessly to light rail, Metro, MARC, commuter bus and other services. It will change how people get around in Baltimore because they’ll be able to rely on the system to get there, on time, to where they want to go.”

The GBC’s next Newsmaker series event is with Baltimore City Public Schools CEO Dr. Gregory Thornton on Thursday, May 19, 2016. Learn more and register to attend.