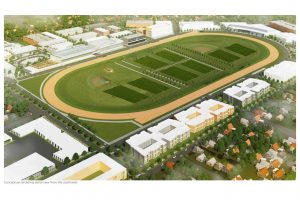 On August 26, the Greater Baltimore Committee (GBC) hosted a Newsmaker Speaker Series to discuss matters related to Pimlico/Preakness legislation: How was it passed? What will be the ultimate outcome at Pimlico Race Course and Laurel Park? What does this mean for the Park Heights neighborhood and Baltimore?

Topics covered included legislation introduced in the 2019 General Assembly legislative session, support and opposition to the proposed bill, negotiating a win for Baltimore City, steps taken during the abbreviated 2020 General Assembly session and, ultimately, the renovation of Pimlico and preserving the Preakness Stakes in Baltimore.

In his introductions, Fry said, “Today’s program brings attention to one of the most significant issues that has confronted Baltimore City in recent years.”

Here are some timeline highlights and key takeaways from the panel discussion:

Legislation was introduced that would have dramatically impacted thoroughbred racing in Maryland, would have negatively affected the community and possibly would move Preakness out of Baltimore. A team was mobilized to work to defeat the bill.

Bill Cole: “The Stronach Group indicated it wasn’t viable to keep both [Laurel and Pimlico] tracks open and wanted to move all racing to Laurel. …The concept of moving it out of Baltimore was intolerable to most of us.”

Senate President Bill Ferguson: “In order for horse racing to survive in Maryland, this was the bill that had to pass. …[Losing Preakness] would have been like the Colts leaving again — this sort of mental blow. We cannot give up on communities. …We were able to make the case that the emotional and economic impact of moving Preakness would just be absolutely devastating.”

Delegate Nick Mosby: “The unintended consequences were if that bill passed, Preakness was leaving Baltimore. …There were a lot of discussions on what the Preakness meant to the City of Baltimore. …This bill was terrible and really, really bad for Baltimore.”

Thanks to the team’s efforts, legislation to move the Preakness from Baltimore City did not pass in the 2019 session.

Ferguson: “Because of that ’19 session, we are able to get to where we are today.”

Reflections on the bill when it was first introduced:

Sean Malone: “I give credit to the Baltimore delegation and Mayor Jack Young. Every living mayor in Baltimore came to Annapolis and testified in person as to the importance of this and to the devastation that this would cause to the Park Heights community.” The work of Mayor Young and the Baltimore delegation “put us in a position for the first time in a long time to stabilize racing for the State of Maryland and to have two world class tracks.”

Mayor Jack Young approached The Stronach Group and asked what it would take to get everyone in the room together. Bill Cole was the lead negotiator for the City.

Cole: “Mayor Young deserves a ton of credit because he said the only thing that he will not give up on is keeping the Preakness in Baltimore. Everything else we can negotiate, but the Preakness doesn’t leave.”

Several fundamental agreements were made between all negotiating parties, including that Preakness would stay in Baltimore and that Pimlico and Laurel Park would need to be improved and modernized.

On legislation introduced during the 2020 abbreviated session:

The final version of the bill authorizing the building of a new racetrack at Pimlico Race Course and improvements to Laurel Park passed on the final day of the abbreviated 2020 session.

Ferguson: Due to the coronavirus pandemic, “The world changed pretty quickly in a number of different ways. …You just never know how things will play out. We got there. …I’m proud of the work we were able to accomplish in 71 days.”

On lessons learned during the legislative process:

Malone: “I remember thinking, ‘We’ve got to up the fight.’ We had every all-star lobbyist in town pushing in the same way, which was great. That doesn’t always assure victory. …I didn’t think it was going to be as hard as it was. The end result is really good legislation.”

On the legislation’s impact on Baltimore City and improvements to the facilities:

Cole: “Laurel Park becomes a brand new racing facility with a state-of-the-art facility for both people and horses. Laurel Park becomes your day-to-day backbone of horse racing in Maryland. …Pimlico becomes more of an events facility,” which will host marquee racing events such as Preakness. “The key element was introducing the Maryland Stadium Authority as the solution to our problem.”

Development plans for Pimlico include 50-acres of private development opportunity around the track and a brand-new racing oval.

Mosby: “We knew this would be the spark that would uplift the community. …This could be a huge anchor to the redevelopment of Park Heights.  This is a huge opportunity for real minority equity.”

The plan is to start construction on both the Laurel and Pimlico sites in 2021.

Cole: “One thing that was abundantly clear was that this needed to be a community amenity first.” Cole noted athletic fields, pathways to the site and space for low-impact outdoor festivals as a part of future uses for the site.

As for business community support, Cole said, “The Preakness is very important from a tourism perspective. It’s the biggest event of the year for hotels and restaurants. …We need to come together to find a way to promote this as the second jewel of the Triple Crown and the event that we fought so hard to keep.”

Mosby: “When good work is done, it’s really important to expose it. As Baltimore City has consistently received negative headlines, negative attention, a lot of time we don’t take a step back and shine a light on the positive things. This was a huge success.”

Malone: “Baltimore gets knocked a lot. …We have our challenges, but we have tremendous leadership and policy-making talent. We are now stronger than we were in 2019. …Celebrate what is for Baltimore a true victory for so many entities.”