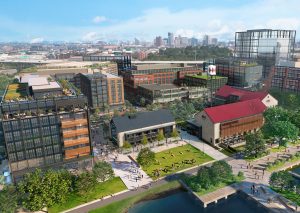 On August 4, representatives from Weller Development Company participated in the Greater Baltimore Committee’s Newsmaker Speaker Series: Port Covington Rising. The discussion covered plans and progress for Port Covington, the importance and impact of the project, and community benefits of Port Covington development.

The Port Covington project — one of the largest urban revitalization efforts in the United States — is a 235-acre master planned redevelopment project. It includes 18 million square feet of new, mixed use development; 40 acres of parks and green space; and three direct access points to and from I-95.

“The tower cranes that dot the skyline along I-95 are a sign of economic growth that the city will enjoy in the coming years as the site and neighborhood develop. The development phase under construction calls for more than 1.1 million square feet of development including office, residential, retail and parking, along with 10 acres of park and public space,” Greater Baltimore Committee President and CEO Donald C. Fry said in his opening remarks. “The project represents one of the largest urban revitalizations efforts in the country. During these challenging and uncertain times Baltimore is fortunate to have this project moving forward.”

In providing an overview of the project, Marc Weller emphasized its commitment to Baltimore’s history. “The project is real and it’s happening and it’s really going very fast exactly like it’s supposed to go,” Weller said. “The common vision is around building a very inclusive piece of Baltimore that everybody can use.”

Weller said he hopes that Port Covington — which is currently home to Rye Street Tavern, Nick’s Fish House and Sagamore Spirit Distillery — will attract tourists and out-of-towners. “Instead of staying in Baltimore one night, we’d like to make sure you come and stay for two nights. We figured by offering that much more to do we can really create another destination — another place for outside visitors that are here for both business and for pleasure.”

While discussing the project’s community impact, Marc Broady noted that “what we’re developing and creating is a community process and system that is just as important as the actual development itself.”

Noting a $100 million Community Benefits Agreement, Broady mentioned workforce training, education and inclusionary housing as some of the initiatives covered by the agreement. “By moving into Port Covington, you are instantly becoming a part of a community benefits package,” Broady said.

He added that an important part of this process is “that everybody’s thinking together about how to best utilize the resources that are coming out of the community benefits agreement. We’re creating housing where there was none and that’s important for people to realize.”

He emphasized both transportation and green spaces as potential benefits. “We’re trying to figure out how to get people to and from work and to and from the site — eliminating barriers to employment that transportation problems cause,” Weller said. “Just being an ecosystem here in the city. Public parks. Having a place where people come and walk along the waterfront and enjoy … beautiful spaces on the water. It’s healthy and good for the community to have something in walking distance.”

Port Covington is founded on an ethos of entrepreneurship and innovation, Scooter Monroe said. “It’s really a whole environment and ecosystem that we’re building here and the idea is that we have something for everyone. The goal here is to grow companies, grow enterprise and creating an environment that the workforce really wants to be in.”

On the benefits of supplier diversity, Broady noted, “It’s creating an ecosystem of individuals that worked on our site that can be proud of it. It’s very important. We’ve got to make sure that we are keeping in line with what the city of Baltimore needs and wants. Supplier diversity is putting people to work. It’s helping minority- and women-owned businesses grow” and providing access to an opportunity that they might not otherwise have, he said.

Additionally, there are plans for an impact village, according to Broady. Businesses and nonprofits doing good work in Baltimore City will have access to free office space and Wi-Fi.

“One of the important things is Port Covington’s location. The opportunity that Port Covington has for Baltimore is that it opens up the commuter pool that Baltimore can draw,” Monroe said. “The fact that we’re on the south side of the city and located right off I-95 with easy accessibility. People in Washington, D.C., people in Bethesda or even Annapolis can do a reverse commute and get to Baltimore in 35-40 minutes. Port Covington creates an opportunity to attract a new talent pool.”

Weller noted: “We have three direct access points off of 95 which is really unique and really one of the most exciting parts about our entire project.”

Monroe said that the team is talking to companies who are in the region and are looking to relocate their office space. He said there are a number of tenants who have already signed letters of intent and that more announcements would be made in the fall.

The team intends to leverage its location as a talent pool in the Baltimore region for medical and life science manufacturing. It is actively marketing and seeking an anchor tenant for a 170,000-square-foot life sciences lab building.

“We looked at the areas that Maryland has strengths in and we put a strategy to go build ecosystems around those sectors,” Monroe said. “The goal here is to take a page out of the Boston or Silicon Valley playbook where Baltimore and Port Covington become a magnet for talented workers for capital and for innovative companies. Our goal here is to help companies attract and retain talent and companies who believe that quality office space on the waterfront is going to inspire their workforce. We’re interested in talking to them.”

“We’re very, very focused on placemaking,” Monroe said. “The authenticity of Baltimore. Everything that you’ll see in our designs of our buildings is tying back to Baltimore’s heritage of industrial waterfront. We want to be true to that ethos, but also be very forward-thinking in everything that we’re doing.” As a result, the design plans incorporate details like bricks, large picture windows with tons of natural light and brick pavers. The Cromwell Street Promenade will be curb-less, so that it can be shut down and transformed into a festival space with the atmosphere of an open plaza.

Weller also noted that the waterfront area is as large as the Inner Harbor. “I think it starts to make you understand just how large this area is and how important it will be for the long term,” he said.

Monroe called the Rye Street Market project the “heart and soul” of Port Covington and added that the intent is to preserve as many waterfront views as possible. He also said the Market is going to be a “Pendry-level design. It’s going to be something that’s really spectacular.”

Monroe noted that “part of the strategy here was to build a number of and a mix of uses right out of the gate because we wanted to have office traffic, residential traffic, retail. Really creating a place from Day One so that when residents move in and office workers come, they don’t feel like they’re on an island. It’s going to be a vibrant neighborhood in Port Covington from Day One when we open in the fall of 2022.”

Noting that the site is being built with the newest technology and it’s all environmentally safe and sound, Weller said, “It’s truly a site that is inclusive for everyone to use.” He added that the team’s top priority was, “first and foremost making sure that it’s truly for everyone in Baltimore.”

Monroe said one of the main goals for Port Covington is to “make this just a really vibrant place that is another great neighborhood in Baltimore.”

Weller agreed: “The beauty of this sort of architectural design … has already led to an environment that is just unlike anything else that anybody’s done in the state of Maryland. We’re really excited about being a leader in this type of development and we know it’s going to take Baltimore into the future.”

In closing, Fry thanked the Weller Development team for providing an update on “a project that will be a significant job creator and economic engine for the city, region and state.”