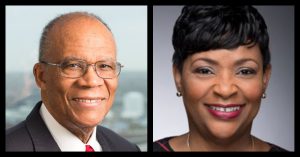 On February 25, 2021, the Greater Baltimore Committee hosted its Newsmaker Speaker Series: The Influential Role of African Americans in Government in commemoration of  Black History Month. Professor Larry Gibson, Professor of Law, University of Maryland, Baltimore, and Maryland House Speaker Adrienne A. Jones served as panelists. Topics discussed included the role African-Americans have played in government and legislative efforts in the Maryland General Assembly this year to address racial equity and social justice.

In his opening remarks, Professor Gibson discussed Baltimore’s role in the Civil War, its sentiment toward slavery before and after the war and some of the city’s greatest assets.

“Baltimore is blessed with an absolutely distinctive relationship with the water,” said Gibson, who noted that Forbes Magazine ranked Baltimore one of the top 15 waterfront cities in the world. “Almost all of the shoreline is accessible by foot. You can walk from a downtown business or restaurant right to the waterfront. We take that for granted.” 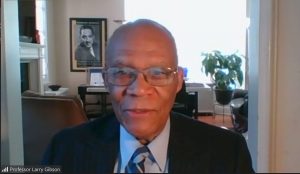 Gibson admitted that Baltimore has its challenges and problems but said he wanted to discuss its best assets — physical and human.

Gibson noted one of the features of Baltimore has been its ambiguity and inconsistency about race. He said Baltimore was a slave-holding city with strong anti-slavery sentiments before the Civil War. After the Civil War, Gibson said, “Baltimore became a center of Black activism and political leadership.”

He then discussed Baltimore’s historical role in desegregation, the Brown vs. Board of Education case, Morgan State College (now University) students staging sit-ins in the early 1950s to fight racial discrimination and the city’s important national leaders, including his personal hero, the late Supreme Court Justice Thurgood Marshall.

“Baltimoreans throughout provided national leadership,” he noted, citing the late Representative Elijah E. Cummings and Representative Kweisi Mfume, among others. “We Baltimoreans have a lot to be thankful for and proud of. Baltimore is one of the greatest cities of the world. Baltimore citizens, companies and organizations have made extraordinary and creative contributions to the development of our nation and African-American Baltimoreans have reshaped our nation’s laws and moved America toward its role of equal justice for all.” 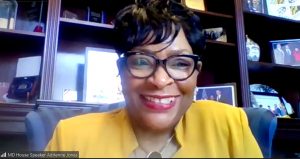 Speaker Jones began her remarks with an overview of the Black Agenda — a package of bills introduced this year in the Maryland General Assembly to address economic, health and other systemic racial disparities.

Jones — the first Black and woman Speaker in Maryland history — said she developed the Black Agenda “in response to the national protests and public demand for greater equity in our Black and Brown communities. …We should be talking about how to create better access and more pathways to economic opportunities.”

Gibson and Jones also responded to questions from the attendees:

On how Baltimore can evolve over the next 20 years:

Gibson: “We’ve got to think of this as a regional matter. Baltimore is in transition, but there are a couple of things we’re going to need to figure out. We need to try to see how we get our neighboring neighbors to invest more in the city. It’s a Maryland asset.”

On how the younger generation can continue the fight for social justice:

Jones: “Be involved. Get engaged. Get your voice heard. Continue to do community types of services. Help out with your church. It gives them experience.” She also noted that mentorships are a great resource.

On the crucial role Black churches and sororities/fraternities have played in the community:

Gibson: “The church has played an absolutely crucial role. Within the Black community, the church was often the only place that — along with certain kinds of fraternal organizations — where you have that combination [of meeting place, tradition of pulling resources]. The Black church has been the central structural organization providing leadership within the Black community.”

Jones: “The start came from the fact we couldn’t get into other areas, so we had to develop our own and they have developed and grown. …They play a tremendous part in terms of the legislature.”

Gibson: “If transportation is available, you can get to other places. Some key moments in Civil Rights history are transportation-related. …Many disparities can be addressed if people can move around a lot easier.”

On the future impact of the Black vote:

Gibson: Much of the South, in terms of politics, is going to change. There are going to be more African-American voters throughout the South. …That’s the way the numbers are and that’s creating fear in some people.”

Jones: “You’ll see across this country ways to try to change voting laws. We need to be aware of that.”

Gibson: “Here’s where our historical perspectives will be useful to young people. As these efforts are undertaken, we try to fight them, but let’s also tell our voters: ‘Your vote is important.’ It’s going to be light years easier for you to vote than it was two decades ago.”

In his closing remarks, Greater Baltimore Committee President & CEO Donald C. Fry thanked the panelists “for the incredible contributions that both of you have made over the years for the State of Maryland. You have had a significant impact and we certainly are indebted to both of you for your service and your public service in particular.”