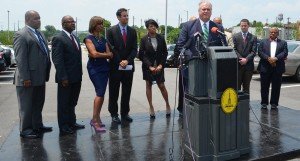 “A week ago we stood at city hall and celebrated that we were able to find employment opportunities for 8,000 young people in Baltimore City this year,” Fry said at a news conference at the West Baltimore MARC Station. “Unfortunately, within about 24 hours, we suffered a body blow from the governor telling us that he was not going to provide funding or move forward with the Red Line.”

“It’s critically important for the governor to take another look at this,” said Fry, who noted the Red Line has been the top economic growth, job creation and transportation project of the GBC since 2002. “Great cities have strong mass transit. Baltimore will not have that without the Red Line moving forward.”

The news conference was held less than a week after the governor announced that he will not commit state funds to the 14.1-mile east-west light rail project, effectively killing it.

As planned, it would run to and from Woodlawn on the west side of the city through downtown Baltimore to the Johns Hopkins Bayview Medical Center on the east side.

The federal government has earmarked $900 million for the Red Line.

“Today we are here to recommit ourselves to finding alternatives to improve transportation and transit in Baltimore City,” Baltimore Mayor Stephanie Rawlings-Blake said. “All of us here, and many others, have signed a letter to the governor calling on the Hogan administration to work with us to find solutions to this region’s infrastructure challenges because you can’t grow a city by thinking small.”

Governor Hogan’s decision comes weeks after a report, released on May 5 by Transportation for America, highlighted that the Red Line would generate more than 15,000 jobs and increase household earnings in the Baltimore region by $539.7 million.

Read what the Baltimore Business Journal, The Baltimore Sun and The Daily Record wrote about the news conference.