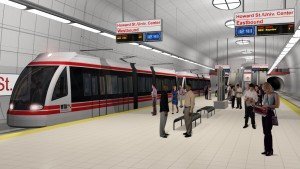 If the Red Line becomes a reality, it would generate more than 15,000 jobs and increase household earnings in the Baltimore region by $539.7 million, according to a report released on May 5 by Transportation for America.

“The Red Line is a jobs line,” said Donald C. Fry, president and CEO of the Greater Baltimore Committee. “It (the Red Line) is a critical piece for our economic growth.”

The Greater Baltimore Committee has been the lead business champion of the 14.1-mile east-west light rail project for 14 years.

The report by Transportation for America, a Washington, D.C.-based alliance of elected, business and civic leaders, assesses the economic benefits of both the Red Line and Purple Line.

The two lines would generate a combined economic impact of more than $9 billion, the report estimates.

Additional Red Line benefits to the Greater Baltimore region, according to the report, include:

“The reach of this is incredible,” said Fry, who noted the Red Line would help boost the region’s economy. “This is a critically important investment.”

Last fall, Baltimore City Mayor Stephanie Rawlings-Blake and Baltimore County Executive Kevin Kamenetz committed to contributing $230 million and $50 million respectively toward construction of the Red Line, which closes the funding circle for the region’s most important transit project in decades. These commitments enable the state to meet the key local funding requirement that puts the project at the front of the queue to receive $900 million from the Federal Transit Administration’s New Starts program. Governor Larry Hogan is making his final decision about whether to confirm state funding for the project.

The report’s bottom line: both lines would position Maryland for economic success in ways that few other investments would likely do. The lines address existing mobility issues and would help to foster billions of dollars in economic development.

Call to action: Send a letter to Governor Larry Hogan urging him and Maryland Transportation Secretary Pete Rahn to read the report and consider the economic evidence in favor of both lines before making their final decision about the projects.