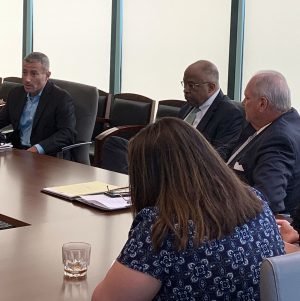 On September 4, the GBC’s Public Safety Committee and the Coalition for a Second Chance welcomed Senator Robert A. “Bobby” Zirkin, Chair of the Senate Judicial Proceedings Committee, to a special joint meeting to discuss legislative priorities for the 2020 session of the Maryland General Assembly. Senator Zirkin provided highlights from the 2019 legislative session and discussed many proposals that are likely to arise during the next session.

Members of the Public Safety Committee and the Coalition for a Second Chance raised questions about many issues that are of importance to them, including expungement expansion, enhanced judicial transparency, negligent hiring immunity provisions for employers who hire returning citizens, modifications to child support enforcement, modifications to driver’s license and registration suspension, and juvenile justice reform, among others.

The GBC appreciates Senator Zirkin’s willingness to hear from the Committee and Coalition about their priorities and to share his perspectives and positions.  We look forward to continued discussions as we prepare for the upcoming legislative session’s advocacy efforts to increase public safety and support enhanced employment and reentry opportunities for returning citizens.