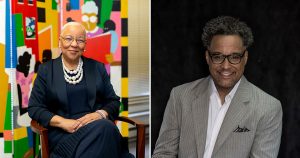 On June 26, 2020, two of Baltimore’s leaders in the fight against systemic racism — Diane Bell-McKoy, President and CEO of Associated Black Charities, and Dr. Sheridan Todd Yeary, Senior Pastor of Douglas Memorial Community Church and Affiliates — joined the Greater Baltimore Committee to discuss the realities of structural racism in the workplace and society. The discussion about structural racism in America explored its impact on economic outcomes, workforce and criminal justice.

Donald C. Fry, President and CEO of the Greater Baltimore Committee, began the discussion with a definition of structural racism: “Systems and structures that create racial inequities in nearly every aspect of life for people of color. These inequities are locked into our social, economic and political systems.”

While discussing the differences between systemic, structural and institutional racism, Bell-McKoy said it’s important to note that “America is built on a framework of a white perspective, white culture. That is the universal standard for America. Because of this, privilege is based on skin color.” She said that hearing the terms “white privilege” and “white supremacy” makes people uncomfortable but she urged people to get comfortable with the discomfort.

“Black and brown people are not inherently dysfunctional and that is an important concept as we talk about structural racism,” Bell-McKoy said.

Dr. Yeary defined structural racism as “inequality reinforced by law. It is legally sanctioned diminishment of the humanity of certain groups of people and the system reinforces that inequality.” To explain the concept further, Dr. Yeary said people should start by knowing our history and provided context for how we got to where we are — going back to how “people” is defined by the Constitution. “We treated people as property. That was their legal status. Because that was their legal status, there was no economic benefit for the vast majority of those who were enslaved.”

Bringing the conversation forward to current events, Dr. Yeary said, “George Floyd gives us white embarrassment because you can’t deny that you’ve seen it now and it also reinforces black humiliation because to us it sounds like, ‘here we go again.'”

Associated Black Charities’ video clip of the history of structural racism in Baltimore shown during the presentation explained that in a structural racism environment, the chances were never equal — black and brown people start behind the starting point. The goal, Bell-McKoy said, is to achieve racial equity. She repeatedly explained that moving to an equality framework for Baltimore “is literally an economic win.”

Answering a question about what a world without structural racism looks like, Dr. Yeary said that an “equity frame helps us to stop the slide. An equity frame is essential.”

Participants also asked questions about bias training, the impact of technology on systemic racism, and if local and state systems can be changed without federal leadership.

“No,” said Dr. Yeary. “You can make incremental change.”

Bell-McKoy agreed, “No. We can’t change, but we can’t use that as an excuse, either. Any business community has influence in terms of money and who they support.  Local corporate leaders are finally getting it. Finally hearing it without shutting down,” she said. “We have influence. We’ve got to understand what’s at stake in terms of economically. We are looking at our future as a country.”

In terms of how to start the conversation, Dr. Yeary said about the idea of “Angry Black People,” “We are not angry at you white person individually. We’re angry about white cluelessness. How do you not know what is going on?” He suggested, “If you can’t be made uncomfortable, don’t come to the party. …Black folks deal with trauma every single day. Do what we do — get a therapist.”

Bell McKoy said that because America is based on a whiteness frame, “that means black and brown people have to figure out how to manage that whiteness frame. …It’s about understanding the culture dynamics.”

As for continuing to enact change, Dr. Yeary suggested that people should “sit in different spaces with different communities to hear different perspectives.”

In his closing remarks for the event, Fry said, “Today’s program just scratched the surface and provided awareness and insights into how we got to this place in social inequity … but there’s so much more to do.”

Fry also announced that the GBC is formulating a multi-faceted initiative to increase awareness, engage in dialogue and to develop solutions to address structural racism. At its formation, that was an initial premise and goal of the GBC founders — to be problem solvers.