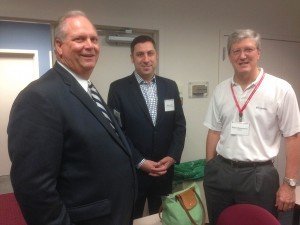 Eight follow-up meetings to continue partnership discussions came out of the first Innovation Partners Meeting, a joint project of the Greater Baltimore Committee, Howard Tech Council and the Tech Council of Maryland.

Eight large area companies in the market for new technologies and services met with 13 innovative young companies at the event, held June 4 at the Charles I. Ecker Business Training Center in Columbia.

“These results show that the desire to partner with local companies is there on the part of our larger corporations.  They are looking for cutting-edge innovation and they found it,” said Don Fry, President and CEO of the Greater Baltimore Committee. All eight of the purchaser companies indicated they would participate again next year.

The presenting companies were identified by contacting local incubators, DBED and TEDCO, the latter of which was the event’s premier sponsor.  From an initial large list, about 30 were sent to the purchaser companies, which narrowed the field to the innovative companies they wished to meet.

The innovation companies were: