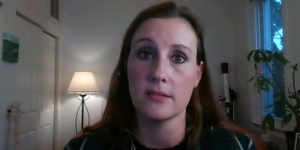 In an economic downturn, all eyes of investors and economists are on the indicators that might help spur a recovery.

It’s elevating the importance of some measures, while downgrading others. To PNC Financial Services Group Senior VP, Managing Director and Chief Investment Strategist Amanda Agati, “the health and psyche of consumers” is the key thing to watch going forward. She laid out three that specific indicators that she’s watching in this area: retail sales, restaurant bookings and airline bookings.

“None are anywhere near pre-COVID or even February levels, and that is really important in engaging the health or lack thereof of the consumer,” Agati said at the Greater Baltimore Committee’s Economic Outlook Conference on October 27. “Wall Street may be flirting with new highs, but Main Street is clearly not out of the woods yet.”

When it comes to the small businesses on those main streets, Comptroller Peter Franchot doesn’t believe the government is doing enough.

Despite months of negotiations, the federal government has yet to pass a second stimulus bill that would include further help for small businesses. With a lack of action in D.C., Maryland made a move at the state level. Last week, Gov. Larry Hogan announced the state is setting aside $250 million from its rainy day fund for small business relief, both to add funds for businesses that have already sought relief from the state and avoid layoffs, as well as target specific areas like restaurants, arts and more.

But Franchot doesn’t believe the package is going far enough. Calling it “long on rhetoric, short on relief,” he said that only $150 million is going to immediate relief, while another $100 million going toward a fund apart from those targeted areas will only be tapped if the economy gets worse. In a letter to the General Assembly urging them to call on Hogan to revise the plan, Franchot said he wants a minimum of $500 million from the state’s rainy day fund to go to small businesses.

Franchot also said a relief plan should send funds directly to businesses to spend funds on whatever expenses are necessary, rather than going through government agencies.

“I will put money in their bank accounts within 48 hours,” said Franchot, a Democrat who himself is planning a run for governor in 2022. “That’s what we need to stabilize the small business community in Maryland.”

The governor’s office did not respond to a request for comment to respond to these critiques.

As for Maryland’s future, Franchot said he saw promise in making the state a hub for high-speed internet connectivity.

Speakers at the event also weighed in on the ongoing presidential election, which will be determined as soon as the night of Nov. 3 — or, given the many mail-in ballots, likely later.

Both Agati and Bernard Yaros, an assistant director and economist at Moody’s Analytics, offered some economic indicators to watch. While the market being up as it currently is typically predicts the party in power will remain there, Agati said that other important indicators like payroll and GDP suggest a change in power. Voter turnout will be a key determinant of whether President Donald Trump or former VP Joe Biden wins.

An important economic consideration is whether folks are going to hold Trump accountable for the economic damage that has been wrought in the pandemic, she said.

To Yaros, who presented models of the election and paths to victory, the unemployment rate is an important indicator, as it signals discontent.

“This one predictor is costing Trump the election, according to our models,” Yaros said.

As far as bellwether states on Election Night, Yaros said he is watching Pennsylvania. If it’s tight there, “Election Night could turn into Election Month,” he said. If North Carolina or Florida go decisively to Biden, that would be an indicator of a Democratic win.

Despite the uncertainty around the race, Agati said the most important thing for the immediate future of the economy is the pandemic.

“The virus literally trumps it all when it comes to the markets,” she said.

To read the complete story, visit the Technical.ly website.