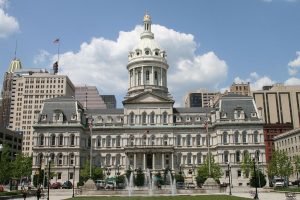 Like many (virtual) workplaces, it was a stressful day during Election Day among the team at Baltimore digital services firm Fearless. So at the beginning of the day, a Slack channel started up where people started posting YouTube clips of the kind of songs that would keep the good vibes going.

As the results of the presidential race continued to be tallied on Nov. 4, they continued to make space for accompanying emotions.

“Everyone’s been very intentional about checking in on one another,” Foster said.

As a prolonged election season stretches out even further, local companies are giving employees some room to participate and process. There are pictures of “I Voted” stickers and mail-in ballots circulating on Slack channels, but, this being 2020, we’re noting additional steps to account for the fact that we’ve never done things quite like this before.

In recent years, more employers are giving their teams civic engagement info and setting aside time for employees to vote. That’s evident from statements by big organizations like CareFirst, which made Election Day a company holiday, and the Baltimore companies like Early Charm Ventures, Protenus and Think|Stack that are signed on to Time to Vote, a national initiative of 1,900+ orgs that gave employees access to voting info, offered paid time off on Election Day or made it a day without meetings.

In a year when many voted by mail due to the pandemic, it can mean changing things up from the usual plan. When it came time to consider taking Election Day off altogether, Canton-based creative agency Kapowza realized the entire team had already voted by mail. So the employees got the day off on Nov. 4.

While Fearless has contracts with the federal government and the team doesn’t talk about who they’re voting for, there was grassroots energy in the company around voter education, and why it’s important to vote.

At Canton-based software development consultancy SmartLogic, a team lunch last week included time for everyone to share their voting plans. And when Election Day arrived, the distributed team shared voting experiences, said content and digital marketing manager Rose Burt. One team member was in Pennsylvania serving as a poll watcher. And during early voting, they learned one team member in Indianapolis said he stood in line for seven hours, putting in nearly a full workday to vote.

Going forward, they’re continuing to check in at team lunches, as is the case with any stressful event, and providing mental health services as a benefit via the HealthiestYou app.

While the results of the presidential race are still coming in, Baltimore got definitive word on the evening of Nov. 3 about races for local office. That included the news that Brandon Scott will become the city’s next mayor. The 36-year-old City Council president won June’s Democratic primary, and now his ascent is official.

With a new mayor, business leaders, like citizens across the city, will be eager to hear his plans. Yet as a longtime city councilmember, he is also well-known around town. So he already has relationships with companies like Fearless that are engaged in community work.

“I believe that he thinks technology is an activator to helping city government operate efficiently” Foster said.

There are a range of issues important to the business community that GBC is ready to work on, and that includes the community of emerging businesses and entrepreneurs, Fry said.

“As a candidate for Mayor, Brandon Scott expressed a focus on the importance of small business growth and development,” he said. “I anticipate that a significant part of his economic development strategy will be to fully develop programs that provide resources and assistance to emerging businesses and entrepreneurs.”

Business leaders can get involved by bringing private-sector solutions to the challenges facing the city, Fry said.

“Business leaders can support the Mayor-elect in collaborating on economic and workforce strategy designed to attract businesses, expand existing businesses and increase job opportunities, advocating for a more robust transportation agenda to ensure the movement of goods, people and services — key tenants to economic growth and employment opportunities. In addition, business leaders can bring private sector practices to ensure more effective government operations and delivery of services to city residents, and being supportive of efforts to assist businesses and the community recover from the impact of the coronavirus pandemic,” he said.

To read the complete story, visit the Technical.ly website.